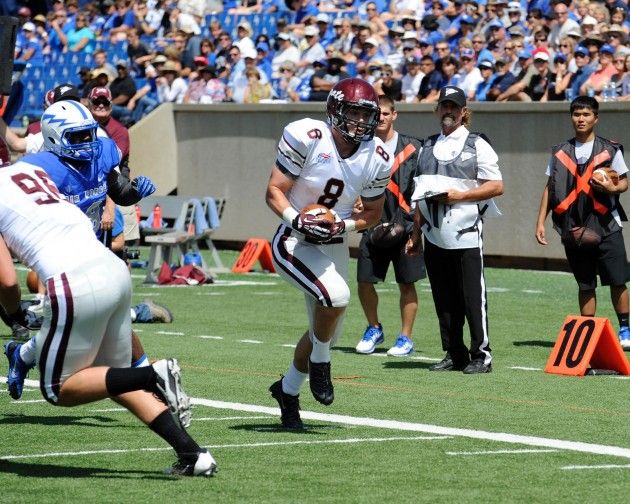 After a strong 2012 campaign, Colgate upped their competition and took on an Football Bowl Subdivision (FBS) football opponent in the Air Force Falcons. Despite the Raiders’s best efforts, the Falcons took the game 38-13.

As defending Patriot League Champions, the Raiders are coming into the season with high expectations. With returning senior quarterback Gavin McCarney, who was voted fifth for the Walter Payton Award as national player of the year, the Raiders knew they had a solid leader for their offense.

McCarney took this leadership and gave the Raiders a 7-0 lead early on in front of 32,095 fans in Colorado Springs, Colo. With the Raiders first drive of the game, McCarney led his offense 86 yards on 13 plays, finishing with a 15-yard touchdown pass to junior tight end Kevin O’Connell. Controlling the ball for about 10 minutes and taking up a majority of the first quarter, the Raiders were able to head into the second quarter with a 7-0 lead.

As the second quarter began, the Falcons offense began to click and they marched down the field to tie the game up at 7 with just over 11:30 remaining in the second quarter. After a defensive stop for the Falcons, their offense went 84 yards in just over three and a half minutes to take the first lead of the game at 14-7. The Raiders offense sputtered on the next drive, going three and out and handing the ball back to the Falcons quickly who capitalized on the ground pushing the lead to 21-7 going into halftime.

The Raiders came out strong with a 12-play 64 yard drive that brought the Raiders to the Air Force 9-yard line, where they failed on fourth-down. The Falcons next three drives all resulted in scored, with two of them leading to rushing touchdowns on 88 and 89-yard drives. On the day, the Falcons gained 409 yards on the ground, reminiscent of what the Raiders offense is able to do to most defenses.

With the score at 38-7, the Raiders had one last drive late in the fourth quarter to put more points on the board, and they succeeded. Making his first collegiate start at running back, sophomore John Wilkins pushed his way into the end zone from 1-yard out to put the Raiders on the board. Wilkins finished with 90 yards on the day carrying the ball 23 times. A missed extra point on the touchdown put the final score at 38-13.

Despite starting off 5-5 passing, McCarney finished with 14-27 with 143 yards through the air as well as 35 yards on the ground. Senior Dan  Cason, who is a leading candidate to become McCarney’s top target this season, caught six passes for 60 yards while O’Connell caught five passes for the same yardage but also added a touchdown.

On the defensive side, junior Kris Kent led the team with 10 tackles, while juniors Jake Kern and Vinny Russo each recorded eight. Sophomore Victor Steffen recorded the team’s only sack of the game.

This coming weekend the Raiders return to FCS competition as they look to avenge their loss to the Albany Great Danes from last season. Kickoff is at 6 p.m. from Andy Kerr Stadium.