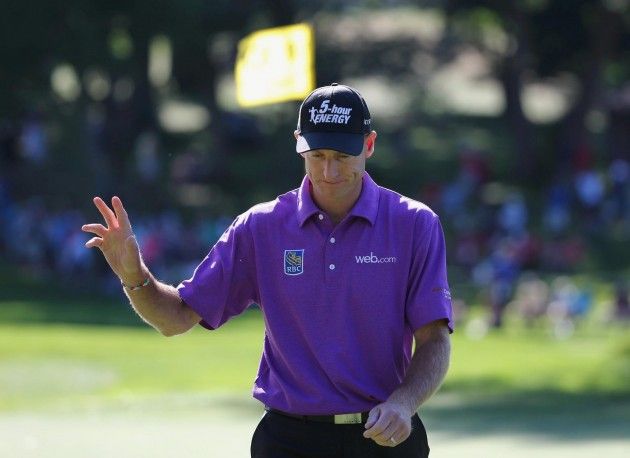 It’s rare when a golfer posts a sub-60 and a course record and doesn’t win. However, this was the case for Jim Furyk, who failed to close on a 54-hole lead at the BMW Championship this past weekend. Playing at the Conway Farms Golf Course in Lake Forest, Ill., Furyk reminded us that it takes all 72 holes to decide who the winner is as Zach Johnson captured his tenth PGA Tour title. Even though Johnson deserves credit for the victory, posting a 16 under, the main story this past weekend was the inability of Furyk to seal the deal. When a player shoots 12-under-par in one round, people expect him to win the tournament, especially when he’s holding the lead after 54 holes.

However, this has been a recurring theme for Furyk over his inconsistent career. He has shown signs of brilliance, yet somehow finds a way to lose. Clearly, shooting a 59 in the second round does not guarantee a victory, as he became the third 59-shooter to not go on to win. But at Conway Farms, Furyk’s 59 was better than anyone else’s by six strokes, and bested the field average by more than 12. In other words, Furyk was dominant, just not at the right time. It stings even more that Furyk took a one-shot advantage over Steve Stricker and a three-shot cushion over Johnson going into the final round.

To keep adding on, the previous five times Furyk has held a 54-hole lead, he has failed to convert, including twice in major championships and once at a World Golf Championship event. Compared to the past, this loss isn’t as tough to swallow, as it seems that Furyk is almost numb to blowing a 54-hole lead. At the 2012 U.S. Open, Furyk was tied for the lead on the 16th tee of the final round and lost; at the 2012 WGC-Bridgestone Invitational, he double-bogeyed the last hole, costing him the victory. Most memorably, last month at the PGA Championship, Jason Dufner passed him in the final round to go on to win at Oak Hill. Even though Furyk relinquished what seemed to be a pretty sure win, especially after 36 holes, credit needs to be given where credit is due, and that’s exactly the case for Zach Johnson. Johnson played his best golf on Monday (due to a rain delay), rolling in two impressive birdie putts over the closing holes to finish with a six-under 65 and a

In the larger scheme of things, Johnson’s victory at Conway Farms gives him a top five seed for the Tour Championship next

weekend and a good shot at the FedEx Cup title and its $10 million prize. However, it’s going to be difficult for Johnson to win the FedEx playoff because of all the talent at the top of the leader board, most notably a guy named Tiger. The FedEx playoffs has just one more event remaining before a winner is finally determined and in this last event, the stakes will be higher than ever as the winner will earn 2,500 points opposed to the usual 500 or 600.

With the stakes as high as they are, it’s natural to assume that Tiger Woods, currently sitting in second place in the FedEx standings, will be at the top of his game. However, at this point in his career, is Tiger just all about winning majors? I definitely think that Tiger will put together a fine tournament in order to keep momentum and his spirits high moving into the next major. At the end of the day, Tiger’s legacy will not be judged on how he plays in the FedEx playoffs, but on how many majors he wins and whether or not he passes Jack Nicklaus’ record. That being said, the current number one in the standings, Brandt Snedeker, has a great chance to take home the $10 million. Obviously, his odds are good sitting atop the standings, but Snedeker will be put to the test going head-to-head with Tiger, along with Henrik Stenson and Adam Scott, who are both playing good golf as of late. I’d say I like Furyk’s chances sitting in the five spot but after such a disappointing loss this past weekend, its difficult to side with Jim. Yet, the great thing about golf is that no ones knows what will happen. All five of these guys can take home the FedEx Cup; however, its difficult to go against the greatest player of our generation and arguably of all time. Look for Tiger atop the standings when it’s all said and done.