The Locavaux Project Explores Local Music Across the U.S. 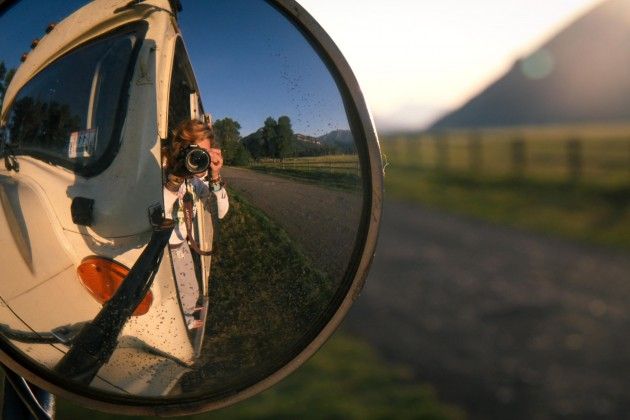 Three members of Colgate’s recently graduated class of 2013 spent their summers traveling across the continental United States in a retrofitted school bus. While many of the alumni spent the summer finding or starting new jobs, or perhaps preparing to continue their education at another institution, Chase Jackson ’13, Hallie Kohler ’13 and Katie Scribner ’13 had other plans.

Jackson had always wanted to convert a retired school bus into a mobile home built for road tripping, and Kohler and Scribner were eager to join him. The trio sat down in April of their senior year to brainstorm what they could do on the road in a retrofitted school bus. Throughout their four years at Colgate, the friends had attended concerts and music festivals together both in Hamilton and their hometowns. They decided to explore music scenes across the country; thus the Locavaux Project was born.

“We decided that we loved the community formed around local music in our own personal lives, so why not explore it on a country-wide scale?” Scribner said.

Locavaux, a term referencing the consumption of music that is locally manufactured, was the inspiration for Jackson, Kohler and Scribner to launch a campaign on Kickstarter.com. They did this in order to raise money to purchase a school bus for transportation, supplies to renovate it, gasoline and camera equipment, all towards achieving their goal of creating a short film that explores communities developed around local music. During the late spring and early summer, the Locavaux Project was featured in numerous Colgate social media outlets, generating financial support from Colgate alumni.

“To see Colgate alums from classes dating back to the ’70s and ’80s reaching out to support our project was inspiring. They’re not lying when they say that the Colgate network is one of the most loyal and supporting [alumni] networks out there,” Scribner said.

The Locavaux Project far surpassed its fundraising goal of $6,000. They bought a retired 1996 school bus and Jackson immediately began to work on it. He used Colgate’s studio art facilities with the help of Professor Dewitt Godfrey and a handful of recent Colgate graduates and students.

Kohler and Scribner went home to prepare for the trip and by June 10, just a month after commencement, the trio hit the road. Over the next ten weeks the bus traveled over 12,000 miles examining local music all across the country in big cities and small towns alike. Jackson, an art history concentrator and film studies minor, was the professional bus driver and also took care of some of the filming, although the brunt of the filming fell on Kohler, a studio art concentrator and film studies minor who also took most of the pictures seen on the Locavaux Facebook page and blog. Scribner, a sociology concentrator, connected with bands, venue owners and various other groups along the way, all while updating the blog (http://locavaux.com).

About three weeks into the journey, which took the bus as far away as Seattle and San Francisco, the Locavaux Project returned to Hamilton. Their homecoming coincided with the official end of their Kickstarter campaign, so the owners of the Hamilton-based Good Nature Brewing, Inc., who knew Jackson through Professor Godfrey, threw the trio a launch party at the brewery’s new downtown Tap Room.

“We were happy to host and have them take some footage while they were here and while we had a local band playing. It felt like a nice way for them to come full circle,” owner of Good Nature Brewing, Inc. Carrie Blackmore ’08 said.

With many of the people who helped make the Locavaux Project a reality in attendance, the launch party was a huge success. Syracuse band Master Thieves played a set and was filmed for the project, as was head Good Nature brewer Matt Whalen, who discussed the role local business plays in promoting local music.

The three members of the Locavaux project will return to Colgate this fall to edit their film, which will feature performances and interviews with club owners, radio hosts and not-for-profits, just to name a few. Viewers of the film will also get to know Jackson, Kohler and Scribner who will include some scenes from their experiences on the bus and arriving in various towns and cities across the country. The trio originally set off across the continental United States trying to answer the question, “Does local music create a sense of community in any given area across the United States?” By becoming a part of many communities across the country and not filming from “a far-off, outsider-looking-in perspective,” the Locavaux Project found its answer.

“It didn’t matter what type of person we were speaking to…All that mattered is that we took a vested interest in their local talent, what their hometown had to offer, and people responded with as much enthusiasm, kindness and support as my own mother would have,” Scribner said.