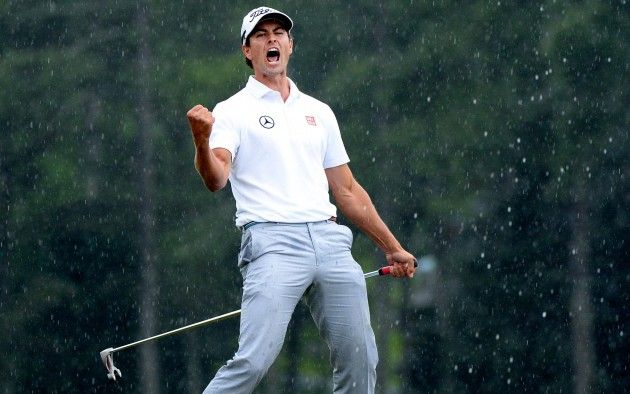 In a memorable finishing round at the Masters on Sunday evening, Adam Scott defeated Angel Cabrera on the second playoff hole to become the first Australian player to don the green jacket. Making up for past failures by fellow Aussies Greg Norman and Jason Day, among others, Scott drained two impressive putts in the final three holes at Augusta National to seal his first major victory. In the process, he gave caddie Steve Williams an opportunity to savor the taste of a Masters win without Tiger Woods by his side.

For his part, Tiger never could adjust to the rainy conditions at Augusta on Sunday, carding a 70 and a final score of 5-under par. Woods was hampered by a costly two-stroke penalty Friday, which was given as a result of an improper drop on the 15th hole. On that hole, his third shot from the fairway took a terrible bounce off the flagstick and rolled back into the water hazard, negating what would have been a spectacular approach. Instead, Tiger had to take a stroke and distance penalty and made a gorgeous up and down for bogey. Or so he thought. Following his round, officials reviewed the drop, as well as statements Tiger himself made concerning the drop, and assessed him a two-stroke penalty for not playing the ball in the same position as his previous shot. Furthermore, several golfers questioned why Tiger wasn’t disqualified for signing an improper scorecard at the conclusion of the round, but apparently the secret Masters committee met during the wee hours of the night and determined Tiger’s case should be a “special” exception to the rule. No word was given on whether that decision may have been motivated by the millions of dollars Augusta and CBS stood to lose should Tiger be disqualified from the tournament, but I think we all have a pretty good idea.

Regardless, even with the penalty, Tiger still had a chance to make a run for the green jacket Sunday if not for his inconsistencies with the short stick. With the rain pouring down, conditions were much slower on the greens, and Tiger was never able to adjust. Putt after putt came up short for the world’s number one-ranked player, who finished four shots back of Scott and Cabrera. Tiger will need to wait until June’s U.S. Open to vie for another major championship at Merion Golf Club in

This Sunday, it was Scott who was able to taste major victory for the first time, thanks to the fine work of his long putter, a club that has faced much media scrutiny over the past few months. The PGA and USGA have been considering a possible ban on the use of long putters, which players can anchor against their chest for support throughout the putt. Such an anchoring takes away from the challenge of having to stabilize a free-swinging club through the stroke and is known to aid golfers who struggle with short to mid-range putts. Scott switched to the long putter two years ago after having several issues with his putting in big tournaments, and after this Masters win, it seems he has found his rhythm with the club. But as big as this win was for Scott, it will certainly lead to further

questions about the legitimacy of the club.

With that side note on the long putter out of the way, let’s break down the final few holes Sunday that allowed the Aussie to capture his first major. Scott reached the par-4 18th one group ahead of Cabrera, who was playing alongside the ever-fearsome Brandt Snedeker. With both men at 8-under par for the tournament, Scott figured that a birdie might be able to seal a win, and a par was a necessity. He knocked his mid iron about 20 feet away, giving him the standard right-to-left breaking putt typically reserved for the 18th on Masters Sunday. With the long putter in hand, Scott smoothly rolled his Titleist ball into the left side of the hole, garnering loud cheers from the Augusta patrons. The usually reserved 32-year-old let out a huge scream of what appeared to be, “Come on Aussie!” to his caddie and then focused in on executing a semi-awkward high-five grab, of which CBS was willing to give us about thirty slow motion replays. Needing a birdie now to force a playoff, Cabrera dialed in his mid iron to about three feet from the cup, sending shivers down Scott’s spine as he signed his scorecard. The 44-year-old Argentina native tapped in and embraced his son who was serving as his caddie.

Playing the 18th again as the first playoff hole, both men fell short with their approaches, leaving uphill chips. Cabrera clipped his ball perfectly and it nearly rolled in, which would have given him the tournament. Instead, both he and Scott settled for pars and headed to the tenth. There, they both struck beautiful approaches giving them makeable – albeit not easy – birdie putts. Cabrera had the tougher chance, as his was a rainbow right-to-left 15-footer. Unfortunately, he couldn’t get a putt to fall once again, and the ball hung on the outside edge of the cup. Facing a slight breaking 12-footer for the win, Scott stepped up and drilled it, sealing Cabrera’s fate. Golf fans couldn’t have asked for a better finish on Masters Sunday, even if we were missing the signature red shirt of