The Brothers Annual Charity Week Strives to Raise $5,000 for Local and National Charities 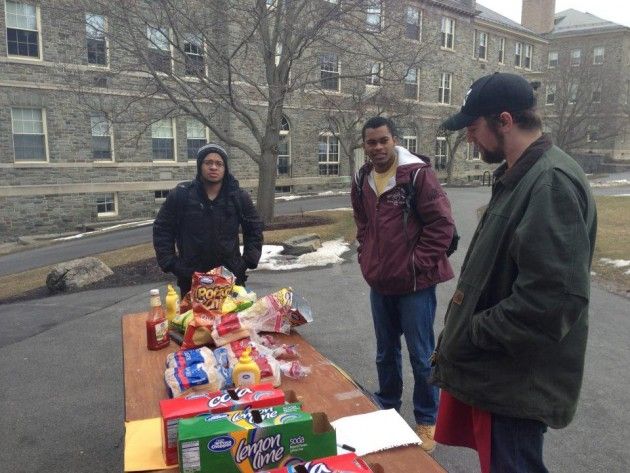 The Brothers Annual Charity Week concluded on Saturday, March 29 with hopes of exceeding $5,000  in donations for charity. The Brothers of Colgate University (Brothers) began as a book club for Division I athletes of color, but in its 14 years of existence, has developed into a more diverse group that unites men of color and of lower socioeconomic status to address the world’s current social issues.

“For me, Brothers is a group on campus that provides the space needed for any kind of discussion that would not be found anywhere else at Colgate,” Brothers Scribe sophomore Michael Pichardo said.

Charity Week has been a tradition for 14 years during which Brothers raise money to benefit two different causes each year, one being local and the other international. This year, the group selected Operation Smile as its international benefactor and the Southern Madison County Volunteer Ambulance Corps (SOMAC) as its local benefactor. Operation Smile is a international organization that aims to spread smiles by correcting cleft palates of children in developingcountries. SOMAC, founded in 1986, is a nonprofit organization that provides services for the town of Hamilton and surrounding areas. The group is in need of a new ambulance and is campaigning for additional funds.

On Tuesday, March 26, Brothers joined with The Games Afoot and the Blue Diamond Society (BDS) for a Super Smash Bros tournament in Donovan’s Pub and the winner claimed his name to a trophy.

Brothers teamed up with The Games Afoot again on Wednesday, March 27 when they co-hosted a poker tournament at The Edge. The attendees played for stakes that were donated to the charities, but the winners walked away with trophies and bragging rights.

Spring weather on Thursday, March 28 allowed for the Brothers to host an afternoon barbeque on the Academic Quad.

On Friday March 29 Brothers, BDS, Phi Delta Theta, Phi Kappa Tau, Sigma Chi, Beta Theta Pi, Theta Chi and Delta Upsilon banded together to auction off  bachelors, which gave attendees the opportunity to bid on a chance for a date as the men strutted their stuff across stage.

The group finished off the week on Saturday, March 31 with an afternoon three vs. three basketball tournament in the Huntington Gym with trophies for the champions.

The group designed graphic tee shirts that featured silhouettes of superheroes to add to the proceeds.

“For the past 14 years we’ve put on charity week as the capstone to our community service involvement for the year,” Brothers vice president sophomore Saeed Mouzaffar said.