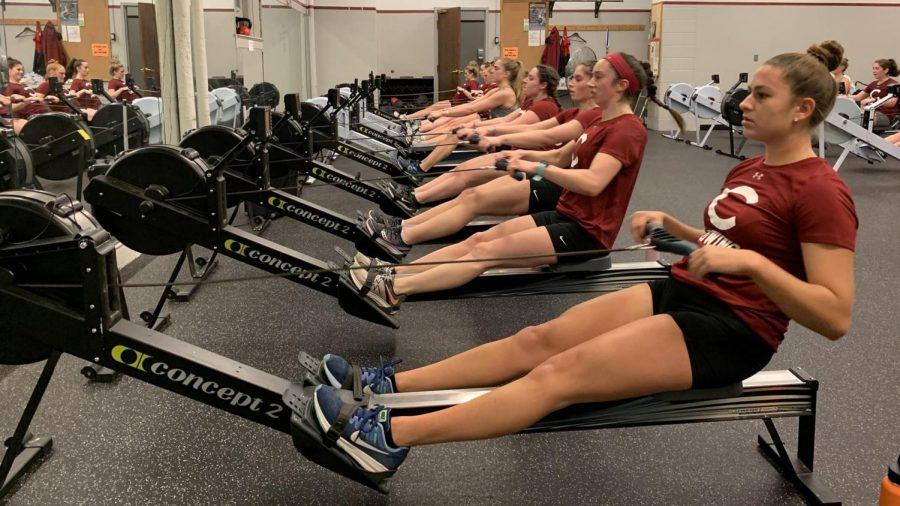 “It was definitely exciting to have a presence in this competition since it is both a very unconventional style of race and since it is for something other than just team ranking,” senior Luke Smith said.

“For virtual events, you don’t get the same intense atmosphere of a head to head race, so we focused our attention on hitting our goal split and cheering for each other,” senior Taylor Wright said. “The rowing community is small and tight-knit, so rowers always jump at the chance to support each other and to help each other out. We were also excited by the opportunity to test ourselves against some of the nation’s top collegiate program.”

“First of all, something like this, it needs to be fun! Doing it as something fun takes some of the pain out of it,” men’s head rowing coach Khaled Sanad said. “Altogether, each rower ended up doing at least 11 500s and a few 250s. The coaches, coxswains, our faculty liaison and one of the Assistant Athletic Directors jumped on to contribute meters to the challenge. It was a grueling workout, but at least it was fun.”

“As a first time competitor in the event, we were excited to compete against bigger rowing programs in the NCAA. We looked up past results in order to help us set a goal to achieve as a team. I’m happy to say that we beat our goal and were not too far off of the bigger programs who have done this before,” women’s head rowing coach Jessica Deitrick said.

In addition to the arduous task of rowing 100-kilometers as a team, the Colgate program, featuring a smaller roster than most of the competing schools, had one more technical challenge.

“The one difficulty for us is that we have 20 athletes trading off on the five machines, whereas other programs have ten or more rowers per erg. This means more rest and faster splits throughout the race for the larger teams,” Smith said.

Despite the teams wanting to take a competitive approach to the race itself, the fundraising battle is another significant part of the mission of Connor’s ERG Challenge. The goal is to reach 75,000 dollars from all of the participating schools’ contributions combined, and each of the Colgate rowing programs has set their goal at 5,000 dollars.

The energy was lifted by the mission of the event and was noted by the women’s rowing team.

“The atmosphere in the erg room stood out to me. Everyone brought a lot of energy and heart to the event. I loved seeing the new rowers who walked onto the team over the past few weeks step up to the plate. Plus, Professor Perring, our faculty liaison, jumped on the erg and helped us out. Our sport tends to fly under the radar because we do not have home races, so this was a great event for people to see us in action. I greatly appreciated seeing members of the community come out to support us!” Wright said.

“It was good to do something almost totally selfless for others. I say [almost] totally because there was a small benefit to the team as a whole. We got in a great workout! Meters make champions,” Sanad said.

The men’s rowing team will have some time off for training in Hamilton before traveling to Philadelphia, PA for their next race, the Knecht Cup, on Friday, April 10 and Saturday, April 11.

The women’s team is back in action two weeks earlier, as they have the one-day Cayuga Duels in Ithaca, NY on Saturday, March 28.