Women’s Tennis Has Best Season Ever, 11-5 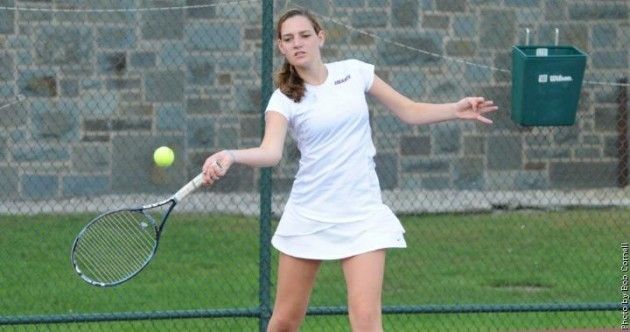 The women started the

With the adrenaline from the formidable doubles point win still pumping, the Raiders began their singles matches. In the first position, Shea battled through the first set, coming out on top 7-5, and handily won the second set 6-0, getting a win on the board early on. Wanhainen, in the second spot, handily crushed her Red Dragon opponent in a 6-0, 6-2 matchup.Ho, Rock, and first year Katie Grant all slammed their Cortland

competition in the third, fourth and fifth spots, respectively.

None of these women gave up a single game in their first outdoor match. Sophomore

Olivia Rauh played her first match of the spring season in the sixth spot, and overpowered her

“To finish the regular season 11-5 was a good turn around from last season and that is a testament to our depth and attitude this year,” head coach Bobby Pennington said of the team’s

The Raiders will hit the court again on April 26 for the Patriot League Tournament, hosted by Army in West Point, N.Y..