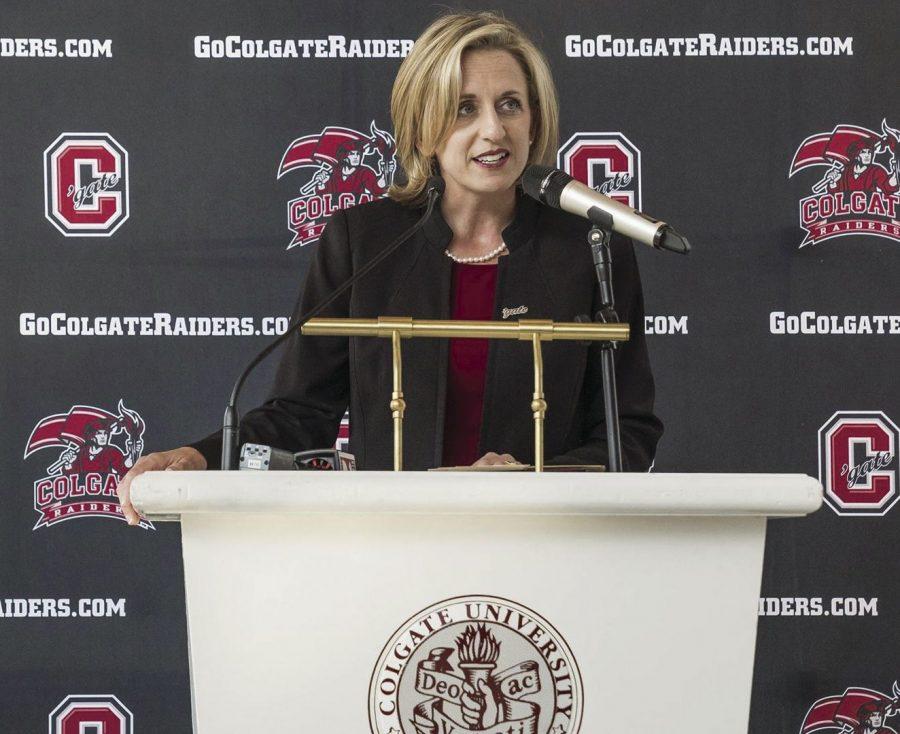 This article is Part One of a three-part series written after an interview with Athletic Director Nicki Moore on Wednesday, January 29. Part Two will discuss Moore’s extensive background working with and counseling student-athletes and how she plans to support Colgate’s student-athletes on and off the fields and courts. Part Three will dive into Moore’s long-term vision for the Athletic Department.

When Dr. Nicki Moore subbed in for Vicky Chun as Colgate’s Athletic Director in June 2018, she started with a clear drive and ambition in line with the University’s greater Third Century plan. Along with rethinking Colgate’s mascot, aiming to move away from anything resembling human form, she has ambitions to match the aesthetic of the athletic facilities and program with that of the campus typically regarded as one of the finest in the nation. Colgate’s sports teams, though, are not quite there yet.

Moore earned her Ph.D. in Counseling Psychology with an emphasis in Sport Psychology from the University of Missouri. Along with being one of the few Division I female athletic directors in the nation, she was the first full-time psychologist to serve in an athletic department in the NCAA in 2004.

She later went on to be a part of the group that developed the first mental health guidelines for the NCAA, which was distributed to hundreds of schools around the nation.

“I think it’s given me a great deal of perspective and a set of skills that I would not otherwise have, in terms of traversing the athletics career path. To get to be a part of that movement, it in some ways positioned me as an influencer, when it may have just been good luck. But I have enjoyed the opportunity to consult with other athletics departments along the way,” Moore said.

Moore has held a variety of roles across sports administration. She worked with student-athletes in one-on-one sessions, picking up experience as a graduate student. She later picked up gigs in the athletic departments at the University of Oklahoma and University of North Carolina at Chapel Hill as an Associate Athletic Director and Senior Woman Administrator. This demonstrates her ability to lead and find answers to problems.

Leading a strong team is one feature that is consistent to Moore’s philosophy; in order to bolster her staff, she borrowed the idea of bringing on “fellows” from her psychology background and brought it to Colgate’s athletic department. The result: she and her staff benefit from the extra, affordable people-power brought by AAA professionals, ready to make the leap to the pros, in exchange for supervision and—as we intern-aged students know well—treasured, practical experience.

Although her experiences at OU and UNC have inspired some unique and innovative ideas in Hamilton, adjusting to Colgate’s differences in size, resources and academic expectations took Moore some time.

“We genuinely emphasize academic engagement and academic achievement among our student athletes first and foremost. Other places that I’ve been do at different levels, it was a bit of a shock for me to hear we don’t start practice until 4:30 p.m” Moore said. “The resources are very different. The challenges are very similar. The buckets of challenges, you could have the same number, same types at almost any institution you go to. But the valence changes from place to place.”

But, Moore has found ways to surprise even herself as she has taken on the role of Athletic Director.

“I was just talking to my dad the other night, and who would have thought that my administration would be the one to introduce alcohol at games,” Moore said.

She attacks long- and short-term projects with passion and a creative edge, as if there is a game to be won.

Because her ambitious plans for the department require funding, she will need to pick up support from alumni and the community.

Starting near the bottom of the hill, across from the varsity athletic fields, Moore is eager to transform the old Huntington Gymnasium into a building that inspires fitness and healthy physical tendencies.

“We should have a recreation center on this campus that brings people in and has them start to develop lifelong habits of health that start here,” Moore said.

And though she is proud of the progress that has been made, such as hiring six new coaches and improving attendance at men’s and women’s basketball games by 140 percent and 29 percent respectively, Moore has a persistent drive to achieve, well, more.

“I still hope that we can continue to do better. I want more students to come and experience athletic events. I want to create a great environment for our student athletes,” said Moore.

With goals to recruit the most talented students and staff to campus, support programs at all levels across campus and build spaces that inspire people to live their optimal lives, Moore brings an exciting vision to Colgate, and her experience serving student-athletes will only benefit the next wave of Raiders to come.