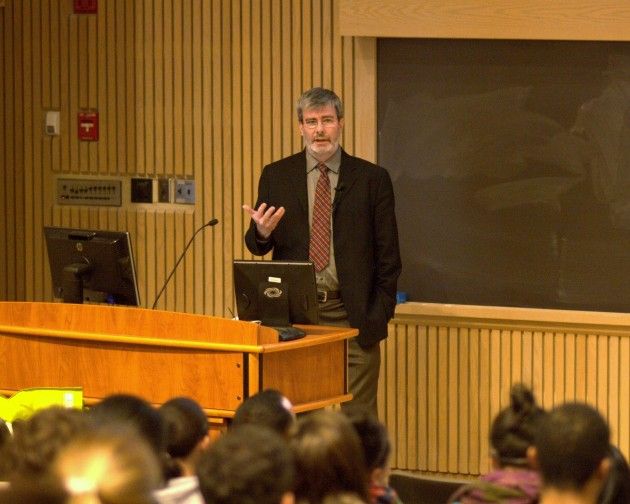 University of California Los Angeles Professor of Law Richard Sander spoke in Love Auditorium, and gave a presentation on the unseen consequences of affirmative action and some potential solutions to this issue on Wednesday, March 27.

Sander has spent nearly two decades researching issues of inequality in the U.S. and has authored numerous papers and articles on the subject of affirmative action.

In an effort to fight inequality and foster racial interaction, our government declared in the 1960s and ’70s that race, ethnicity, religious background, gender and other such characteristics could not affect the treatment of an individual in this country. As a result, employers and competitive schools became compelled to hire or admit minority individuals, implimenting policies that altered admissions decisions. Sander, however, finds increasing evidence suggesting that affirmative action is actually harming, not helping,

American minorities. Sander focused his lecture on what he calls “mismatch,” or an unfit match between school and student, which directly results from “positive discrimination.” For example, a black student may be accepted to a university at which he will succeed, yet forego that acceptance in favor of a more prestigious institution.

“The student who would flourish at, say, Wake Forest or the University of Richmond, instead finds himself at Duke, where the professors are not teaching at a pace designed for him,” Sander said. Students in this position struggle academically, lose self-confidence and either do not graduate or graduate near the bottom of their class, thus perpetuating stereotypes about students of minority backgrounds.

In Sander’s opinion, affirmative action has had negative consequences and should be changed. He proposes more moderate reform, such as programs that begin before college admission and are designed not just to place minority individuals side by side with those of the majority, but to equip minorities with the tools they need to do well once they are given the chance.

Sanders also discussed how equality among all American citizens has perhaps been the most important issue of the past 50 years, and it still hasn’t been achieved. As Sander pointed out, the hardest part of the battle for equality isn’t establishing equality as a right, a law or a theory. Instead, the hardest part is fostering actual equality – achieving a point at which race, religion, ethnicity and gender have no statistical bearing on who gets admitted or hired where.

Sander’s lecture was very well attended; students were particularly receptive to his statistics, many of which were profoundly counterintuitive and (as statistics) unbiased, and many students remained after the lecture to speak with Sander and ask him questions.