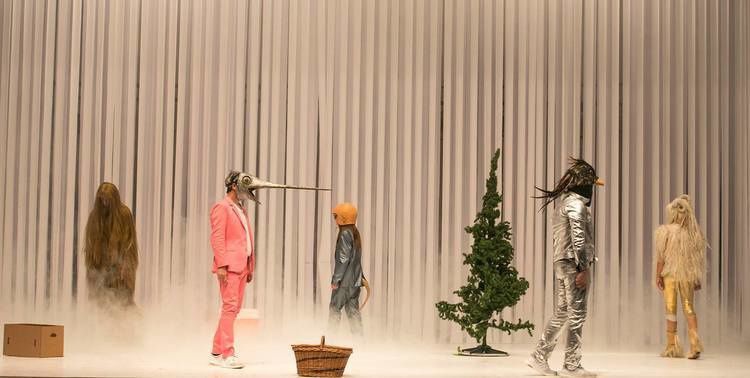 As Argentine contemporary dancers and choreographers Luciana Acuña and Luis Biasotto arrived at Colgate, they were welcomed by the snowy upstate weather that inspired the title of their contemporary theatrical performance, “Hielo Negro” (Black Ice), which was a product of their residency at Colgate University’s Dana Arts Center in February 2019. Though their show had already been seen by audiences in South America, Acuña and Biasotto chose to do their North American premier at Colgate’s Brehmer Theater on Thursday, Feb 13.

According to Acuña and Biasotto, “Hielo Negro” is a composition about the creative process involved in choreographing, improvising and performing a contemporary dance theater show or, as Biasotto articulated, the undertaking of “making something where there was nothing before.”

When the clock struck 7 p.m., the theater’s lights dimmed to complete darkness. Seconds later, “Romeo and Juliet, Opus 64” by Sergei Prokofiev echoed throughout the space. According to Acuña, Prokofiev’s opus was chosen for a very specific reason.

“It is a piece that is commonly used in classical dance. It was fitting to use this piece of music in a show that questions dance and asks: what is dance?” Acuña said.

As thunderous music overwhelmed the space, two spotlights from opposite sides of the stage shined on Acuña and Biasotto respectively. Minutes passed as the performers wriggled on the floor until suddenly the stage lights turned on. Quickly, Acuña stood up and began repeating exaggerated dance movements on stage, as though trying to communicate a story to Biasotto through each gesture. Biasotto then answered through his own movements, which were followed by a startling noise.

“Hola,” yelled Acuña and Biasotto until they received a response from an off-stage voice. As the performers addressed the voice in Spanish, they acted disoriented, questioning where they were and where the voice came from.

Throughout the play, Acuña and Biasotto continued interacting with one another through both words and movements. According to Biasotto, these moments of confusion and unintelligible bodily movements were representative of the performers’ initial struggles while grappling for a story to tell.

“The first stage was like pieces of a sentence we were trying to construct,” Acuña said. According to the performers, Biasotto’s notion of struggling to plan “Hielo Negro” was intensified by feedback from various observers. As a result, Acuña and Biasotto chose to portray this brainstorming process through onstage dance conversations, halted by objects falling onto the set.

Specifically, a rubber tool descended near the end of the performance, cueing a staged interaction with Alejo Moguillansky, the actual stage manager and videographer in their creative team. This exchange conveyed the bewilderment experienced by the performers when they received contradictory critiques during their creation of “Hielo Negro.”

“Every time a new viewer watched it, they would try to change it. Our progress would be like water in our hands—it would just disappear,”Acuña said.

At the culmination of the show, Biasotto blew e-cigarette vapor onto Acuña as she melted onto the stage to Prokofiev’s opus. Afterwards, the performers squirmed under blankets while metal objects fell and broke upon collision with the ground. A projector displayed the words “And one day it snowed” in a large, white font, followed by other seemingly arbitrary sentences while synthetic snow descended.

The audience applauded and reflected on the show.

“At the end of the show, I wondered whether Acuña’s character died at the end. But then I realized that perhaps the performers didn’t even have the answer to that,” sophomore Maria Yepez said after the performance.

According to Acuña, puzzled responses to their performance like those of Yepez were intentional.

“The last image was about a snowy mountain range but it was also about death. We are thinking about absence as something or someone that isn’t there, but also absences of ideas and waiting for the right idea,” Acuña said.

After the show, Acuña and Biasotto stayed for a Q&A session meant to clarify aspects of their performance. The artists generally addressed the meaning of their piece, claiming it represents the baffling process of creating art. Audience members were encouraged to wonder if perhaps they could relate to the bemusement that is a part of the brainstorming process, as represented by “Hielo Negro.”

The main take away from the performance seemed to be one of pushing boundaries, reminding the audience that good art should provoke and question rather than resolve.