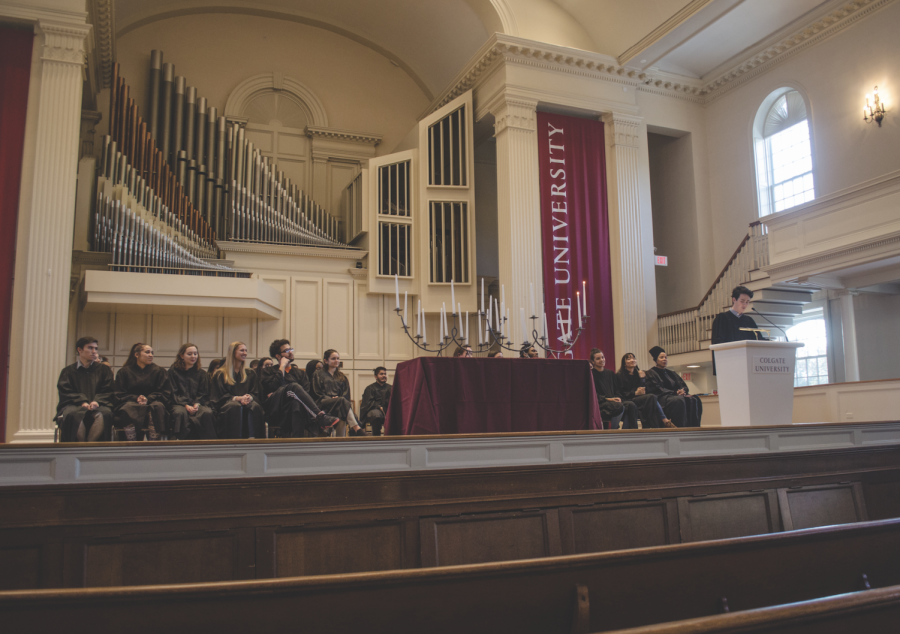 Konosioni members highlighted the leadership, passions and campus and community initiatives pursued by the 26 inductees from the class of 2021 to the Senior Honor Society at the group’s induction ceremony on Monday, Feb. 17 in the Memorial Chapel.

The ceremony began with opening remarks by Konosioni Vice President senior Elle O’Brien, who primarily planned the event along with a committee from Konosioni’s class of 2020. O’Brien began her remarks with the history of Konosioni, which was formed in 1934 as a peer-selected group that brought together two secret societies at Colgate. The 26 members of Konosioni represent 13 from each original society, who joined together with the name

Konosioni chosen by students to honor traditions of the Iroquois Confederacy. This also brought together groups including the Oneida Nation, whose land Colgate sits upon. O’Brien concluded her opening remarks by reflecting on her experience in Konosioni.

“It is not necessarily easy to be and lead in a room full of leaders. But, I have found, especially recently with this group, that here is a place to show up with your passion, and your fear, and your love,” O’Brien said. “I felt then, as I do now, grateful to be part of a group so dynamic, so inspired, and so thoughtful.”

Following O’Brien’s remarks, Provost and Dean of the Faculty Tracey Hucks, a Konosioni alumna from the class of 1987, gave an address as the event’s guest speaker. Hucks spoke of her leadership as an undergraduate and the connection she feels to the legacy of trailblazing African American and women students on Colgate’s campus.

“When I was inducted [into Konosioni], I did not know at that time that I, as a first-generation African American student, was part of a long lineage of Colgate undergraduate leadership,” Hucks said. “I am also welcoming the new class of inductees into Konosioni on the occasion of the 50th anniversary of the entrance of the first class of women such as Diane Ciccone of Ciccone Commons whose pioneering presence transformed this institution into a revolutionary new age of intellectual co-education. Thus, I stand in this tradition of women’s leadership that blazed an important trail on this campus.”

The induction of Konosioni’s class of 2021 included speeches about each of the new members’ qualities and leadership on campus by their Konosioni big, a member of the class of 2020, followed by their joint lighting of a candle. For the eight inductees currently studying abroad, their bigs spoke about them and lit a candle in their honor.

Konosioni co-President senior Kiana Billot-Vasquez said while she did not previously know her little, junior Christina Weiler, she was drawn to her pursuit of her passion for sustainability on campus when reading her application.

“She says she has this passion and it showed in every way possible… I think that’s kind of what I was looking for because that’s how I was too, like, I wasn’t everywhere on campus, I was in one section and I was there consistently,” Billot-Vasquez said. “Her application was just so beautifully written…it really got my attention.”

Weiler, who serves as the Sustainability Liaison on SGA’s Cabinet and on the University’s Sustainability council, said she enjoyed reflecting on leadership in her application. She has also spearheaded multiple sustainability initiatives through Colgate’s Thought Into Action (TIA) program, including sustainability consulting with Hamilton businesses and a campus program that incentivizes recycling through supporting hunger initiatives.

“It was a nice chance to talk about what leadership means to me, because I’ve had the opportunity to be a leader, but also be a member and be someone who followed a leader, so being able to reflect on some of the most inspiring student leaders that I’ve seen on campus,” Weiler said.

According to O’Brien, current members of Konosioni selected the members inducted at Monday’s ceremony, based in part on their commitment to the tenants of Konosioni.

“Konosioni’s three tenants are dedication to leadership, to community service and to preservation of tradition, so we look to see that those shine through in the applications… but really, trying to see the passion and see the kindness in each of these applications,” O’Brien said. “I’m so inspired by this new class.”

Billot-Vasquez added that she looked for people who brought something new to the group.

“I realized as I was feeling that I was really just looking for people that stood out to me,” Billot Vasquez said. “You really do need people that are open minded, and might have these strong feelings, but also show that more flexible side, too.”

Konosioni inductee junior KP Porter, who works as a Peer Career Advisor at the Office of Career Services and serves as the President of the men’s club lacrosse team, said he highlighted his involvement and personal connection to Colgate’s Volunteer Income Tax Assistant Program in his Konosioni application.

“I can very easily sort of see my family needing to use some of the services like that and so a huge thing for me is to use the position I’m currently in—I mean, as a first gen college student and I sort of understand the privileges I’ve been given—so for me not to take that and then help other people in a similar position as me is honestly just terrible,” Porter said.

Junior Emma Goldstein said she attended the ceremony to support a friend being inducted into Konosioni and felt inspired by the leadership of the group of inductees.

“It was pretty incredible to learn about all the inspiring and impactful things my classmates have done at Colgate and for the village of Hamilton,” Goldstein said.

Porter reflected on appreciating his own leadership following the ceremony.

“It’s a good feeling and not often do I sort of take a chance to really take in achievements, but this one is definitely something that I’ll enjoy,” Porter said.

Konosioni will soon begin their direct service with the Oneida nation, the group’s chosen community partner this year. The proceeds from the annual auction on the evening of April 3 at the Colgate Inn will also benefit the Oneida Nation.