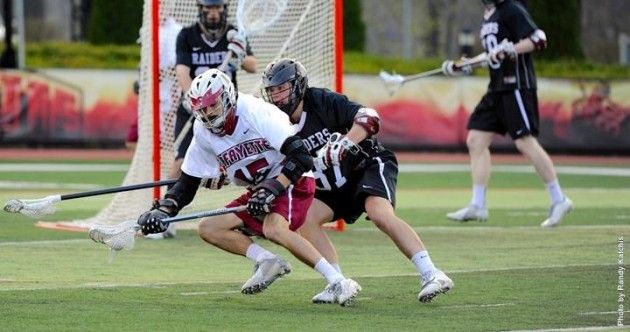 With a one-goal deficit going into the second half, the Raiders exploded and scored 10 goals to propel themselves past the Lafayette Leopards in Easton, Pa. With their 14-10 victory, the Raiders ensured themselves a berth in the Patriot League playoffs with one league matchup remaining.

The Raiders started the game off

minutes into the game. Three minutes later, sophomore Matt Clarkson scored an unassisted goal to put the Raiders ahead 2-0. The Leopards responded, scoring their first of the game halfway through the first

quarter, but tough defense from both teams kept the score at 2-1 going into the second quarter.

In contrast with the first quarter, the Leopards were the first ones on the board, tying up the game just 34 seconds into the quarter and added another at just under five and a half minutes to take the lead. Sophomore Ryan Walsh scored his 29th goal of the season 49 seconds later, however, to tie back up the game for the Raiders. After two unanswered Leopard goals, senior Peter Baum scored his 31st goal of the season to

reduce the Leopard lead going into half.

With the Raiders down 5-4 going into the second half, senior leader Baum ensured his team would not be defeated without a fight. After delivering a halftime speech to inspire his team, Baum came out and scored just 23 seconds into the second half off an assist from Ryan. This was the first of four Raider goals within the first two minutes of the

second half, as Baum would score another followed by netted goals from Foote

The Raiders quickly erased their halftime deficit and gave themselves an 8-5 lead. The Leopards, however, were not willing to go away and scored three unanswered goals to tie the game. The Raiders responded, and finished out the quarter strong with Foote and junior Brendon McCann scoring unassisted goals to put the Raiders out in

The fourth quarter began with the Raiders in the lead and junior defenseman Bobby Lawrence quickly added to the lead, scoring his first of the season 36 seconds into the game. Lawrence’s goal as well as his eight ground balls on the day led to him being named Patriot League Defensive Player of the Week. Shortly after, Foote scored his third goal of the game and fifth of the season to extend the Raiders lead to 12-8. After two Leopard goals to cut the Raider lead to 12-10, McCann scored two goals off assists from Baum and Ryan to end the game for the Raiders,

The offensive explosion in the

second half carried the Raiders to victory, as Baum, McCann and Foote all recorded hat tricks for the Raiders. Baum took a team high 11 shots, while Walsh was just behind him with eight. Senior Robbie

This coming week, the Raiders host the Bucknell Bison on Saturday at 12 p.m. at Andy Kerr Stadium, the last of their