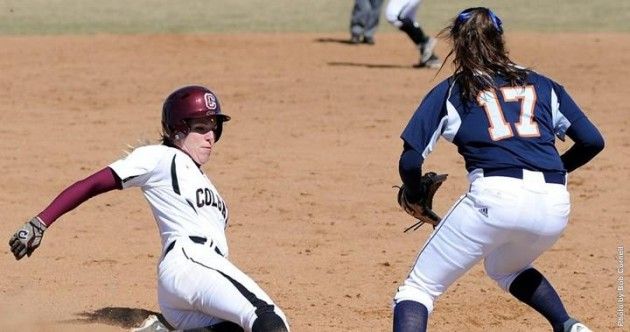 The Colgate softball team won two of four games this past weekend in Worchester, Massachusetts against Holy Cross to improve to 7-5 in Patriot League play. The Raiders split each doubleheader on both Saturday and Sunday against the Crusaders.  After being shut out for a 1-0 loss in Saturday’s opening game, Colgate bounced back for a 5-2 win Saturday afternoon. The Raiders were led by junior Haley Fleming, who went 2-for-7 on the day with two runs, two RBIs and her second homerun of the season. Hot-hitting first-year Mariel Schlaefer added two hits and two RBIs during Saturday’s games. Additionally, senior Alana Dyson, junior Eileen Ornousky, and first-year Marisa Dowling all scored runs for the Raiders.

Senior captain Courtney O’Connell, who pitched Saturday afternoon’s entire game, got a 1-2-3 final inning to secure her fifth win of the season. O’Connell gave up seven hits and only two runs while recording six strikeouts during her time in the circle.

“We had another great pitching

outing from Courtney [O’Connell] in the second game and the top of my order did a much better job of getting on base and making things happen for us,” head coach Melissa Finley said.

In Sunday’s opening game, the

Crusaders were first to get on the

scoreboard when they earned a 2-0 advantage in the bottom of the first inning. The Raiders tried to rally in the top of the second with consecutive singles by juniors Tera Vaughn and Ornousky, but Colgate was unable to bring them home.

The Raiders didn’t find their bats

until the sixth inning. With one out, Schlaefer hit a solo homerun to left field to cut the Cruasders lead to 2-1. The next

batter, senior captain Emmie Dolfi, earned a walk before fellow senior Natalie Siedhof reached first due to catcher’s interference. Holy Cross managed to get the second out of the inning, but a single hit by Vaughn to center field tied the game by bringing first-year Alex Gadiano, who had come in to pinch run for Dolfi, in to score.

Up next, Ornousky then tripled to right field to score two crucial Raiders’ runs. Her hit brought both Siedhof and Vaughn home and gave the junior her first triple of the season. In the bottom half of the inning, O’Connell came in to relieve first-year Brigit Ieuter. She finished out the last two frames without giving up any runs or hits. Ieuter captured the win after pitching five solid innings, striking out five, and giving up only two hits and two runs.

In Sunday’s second game, Holy Cross once again got off to a quick start,

taking a 1-0 lead after the first inning. The Raiders, struggling for a chance on offense, tried to equalize in the top of the fourth after Dolfi reached base on an error. With two outs Vaughn hit a single to left field,

Unfortunately, Colgate was unable to capitalize and failed to bring either Dolfi or Vaughn home. In the bottom of the fifth, Holy Cross added another run to extend their lead to 2-0. The Crusaders were able to hold onto their lead through the remainder of the game to split the day’s doubleheader with the Raiders.  After this weekend’s split, Colgate finds itself tied for second place with Holy Cross in the Patriot League standings.

Up next, the Raiders will be hostingLafayette for another doubleheader this weekend at Eaton Street Field. Both

doubleheaders are set to start at 12 p.m..