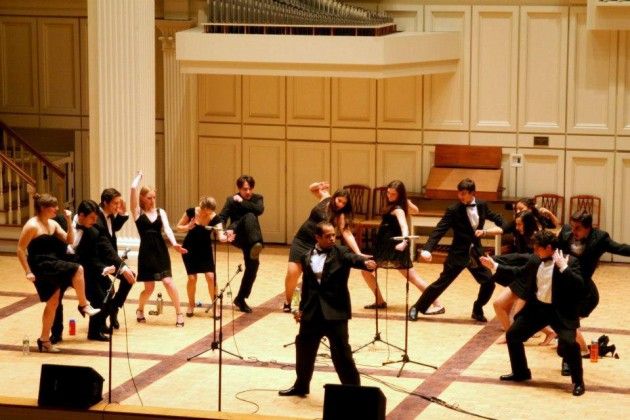 It is a testament to the Dischords’ popularity that despite starting their Spring Concert twenty minutes late, there was still a crowd of well over 50 people excited to see the performance.

Even the Campus Safety officer sitting in the back was on the edge of her seat for the opening number – Taylor Swift’s “I Knew You Were Trouble,” which, fortunately, was much more musical than the video advertisement suggested. If you haven’t seen it yet, I recommend it for the laughs; there’s a shrieking unicorn, a troublemaking boy up a tree and lots of leaves in junior Alyssa Sokol’s face. Just search

“Dischords Spring Concert” on YouTube. Sokol is lovely; the unicorn, not so much.

Possibly my favorite part of the concert was the introduction of two new members, first-years Elena Aragon and Ben Kaufman, with a lyrical tribute to all of the Dischords members written to the tune of “Sky” by Joshua Radin. Not only were their voices perfectly matched for harmonizing, the lyrics were funny for the whole audience: “Logan [Kieg]/your hair is a-flowin'” and “Taylor [Lake]/swears like a sailor,” for example, or “We thought we were so cool/and then we went and met Drew [Hinman].”

Kaufman was also the lead for a great arrangement of 3 Doors Down’s “Kryptonite,” singing as confidently as Superman. First-years Rachel Brown and “Mr. Cool” Drew Hinman himself were the lead singers for “Laws Have Changed” by The New Pornographers.

Another memorable cover, disco song “Kung Fu Fighting” by Carl Douglas, was led by sophomore Wesley Gross, with plenty of entertaining cameos from other members of the Dischords. Fake fights broke out around the circle of singers, with slow-motion karate chops and hops, and Brown and sophomore Justin Lannin had an epic duel center stage. A dance group would have been proud of the final formation, bright sunglasses and all.

Lannin also starred, with a British accent, in a slightly crazed intro to “Tubthumping” by Chumbawamba: “The truth is, I thought it mattered. I thought that music mattered. But does it? Bollocks! Not compared to how people matter.”

It was representative of the energetic and upbeat night. From “I Knew You Were Trouble” to junior Mike Senatore’s “This Side” by Nickel Creek, every member of the group was clearly happy to be there, and never mind the loneliness or profanity in the songs.

It didn’t hurt that the audience was enthusiastic about every single song – sometimes even before the song started. As soon as the diminutive Aragon started to walk up front to the microphones for “Young” by the Noisettes, the audience cheered so loudly it seemed they would overpower her before the song even started.

The two new members summed it up best with their own line.

“I thought my life was fine/then I found this quirky group of mine/’cause we’re singing here tonight.”