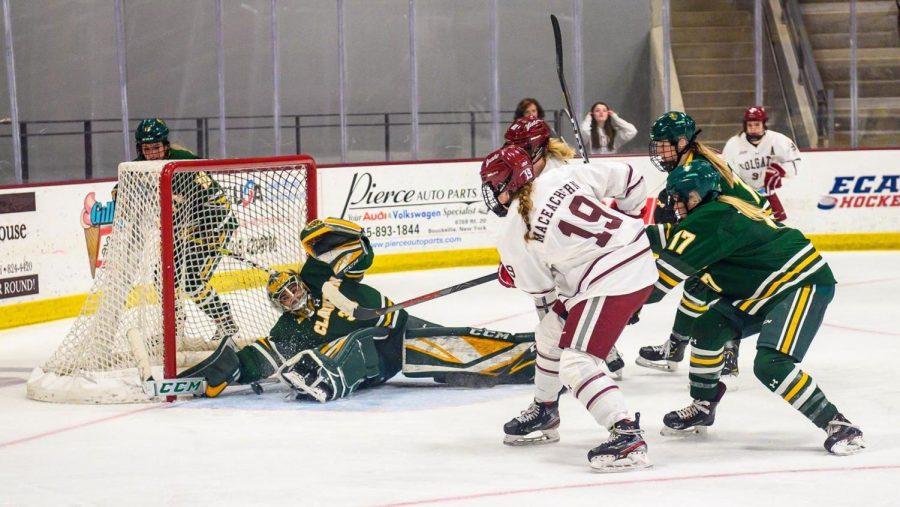 After splitting last weekend’s series on the road, the Colgate women’s ice hockey team came back home and made a statement against the Union College Dutchwomen and the Rensselaer Polytechnic Institute Engineers on Friday, Feb. 21 and Saturday, Feb. 22, respectively.

The Raiders began their weekend Friday night facing Union. Three minutes into the first period, first year Kaitlyn O’Donohoe was the first to strike for the Raiders. Her goal was assisted by first-year forward Danielle Serdachney and first-year forward Sammy Smigliani. The Raiders finished the first period leading 1-0, limiting Union’s offense to four shots on goal. Three minutes into the second period, the Raiders doubled their lead. This time, sophomore forward Delani Mackay lit the lamp and was assisted by junior defense Shelby Wood and first-year defense Maggie MacEachern. After two periods, the Raiders led 2-0, but in the last frame Colgate really pulled away.

Less than a minute into the third period, sophomore forward Eleri Mackay scored for the Raiders on the power play, assisted by Smigliani and Serdachney. A minute and a half later, O’Donohoe scored her second goal of the game. Serdachney and Smigliani each recorded their third points of the game on the O’Donohoe goal.

Halfway through the third period, Delani Mackay scored her second goal of the game with assists from sophomore defense Taylor Kirwan and junior forward Coralie Larose. Four minutes later, Larose gave the Raiders a 7-0 lead with a beautiful goal with assists from Mackay and Wood.

In her second to last regular season game of her career, senior Liz Auby recorded a 14-save shutout in the win and had some crucial saves early on to keep Union from cutting into the deficit.

The Raiders were back in action on Saturday afternoon against R.P.I. for Senior Day, honoring the Raiders’ one senior, goaltender, Liz Auby.  After a dominant performance the night before, the Raiders were looking for a repeat for their last regular season game before the ECAC playoffs began.

Sammy Smiliani was the game’s first goal scorer, eight minutes into the game off of a beautiful play with assists from O’Donohoe and first-year Sydney Bard. Less than a minute later, defenseman Wood, doubled the score for the Raiders with assists from Larose and Mackay.

Malia finished out the first period scoring for the Raiders on a goal with assists from  sophomores Rosy Demers and Noemi Neubauerova. Colgate ended the first period with a 3-0 lead over the Engineers.

Six minutes into the second period, first-year Sammy Smigliani scored her second goal of the game  with assists from fellow first-year Darcie Lappan and junior Shelby Wood, making the score 4-0 over R.P.I.

The Raiders came into the third period with an 8-0, but they were not finished. With six minutes remaining in the game, sophomore Tanner Gates scored to give the Raiders a 9-0 lead with an assist from junior Malia Schneider.

Auby ended the game with seven saves to record her second shutout in a row on her senior day. With her seventh shutout of the season, Auby set a Colgate Women’s Ice Hockey record for most shutouts in a single season.

The Raiders secured the sixth seed for the ECAC playoffs and will face the third seeded Clarkson in Potsdam, New York next weekend.

The Raiders are 0-1-1 against the Golden Knights this season. Clarkson took the first game against the Raiders this season in November, winning 2-1 in Potsdam. The teams tied 2-2 in early February when they met for the game in Hamilton.

Clarkson and Colgate have a history, especially in the past two seasons. In 2018, Clarkson beat Colgate in a thrilling overtime game in the Frozen Four Finals.

Last season, the two teams met again in the postseason in the ECAC semifinals where Clarkson swept the best of three series, ending the Raiders’ season for the second year in a row. The Raiders are looking to rewrite history this year and knock off Clarkson in the opening round of the conference playoffs.

You can catch the Raiders against the Golden Knights on Friday, Feb. 29, at 6 p.m. in the first game of a best of three series. If necessary, the decisive game will be on Sunday, March 1 at 3 p.m.