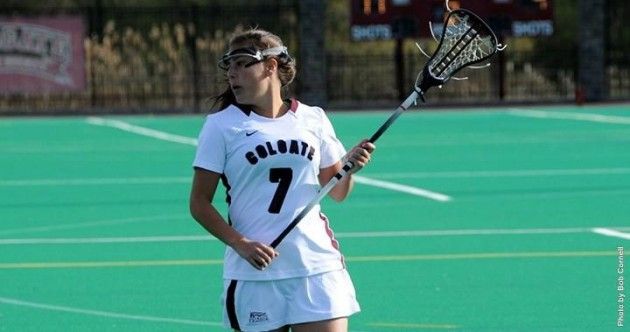 Dover, Del. last weekend. This was the team’s final non-conference game of the season.

Norden also got on the board for Colgate, scoring two and one goals, respectively. While sophomore goalie Jennie Berglin started the game, junior goalie Hanna Longwell saw some action on the field, playing 48 minutes of the game and stopping four shots.

The Raiders had a huge first half, scoring 10 of their 14 goals. The team got on the board quickly with goals from senior midfielder Amanda O’Sullivan and senior attacker Kate Sheridan in the first two minutes. Delaware responded, cutting their deficit in half after a goal in the first five minutes.

Colgate then had a 15-minute scoring streak. Starting with two tallies from Peebles, the Raiders managed to score six goals in a row, bringing the score to 8-1. Three of Ark’s six points came from this run, along with goals from Frost, sophomore midfielder Abby Valentino and first-year attacker Kallan Murray. These were Valentino’s and Frost’s first goals of the season.

A Delaware goal with under seven minutes remaining ended Colgate’s streak, but the Hornets still faced a

six-goal deficit. With some momentum from their scoring streak still left, Colgate

tallied two more goals before the end of the half, one from senior midfielder Quincey Spagnoletti and one from Norden.

The second half was not as exciting as their first, as no goals were scored in the first 15 minutes. Ark finally fired a successful shot to make the score

11-2, followed by Frost who increased the Hornet’s deficit to 10 goals.

First-year attacker Taylor Fischer and Ark scored the final two goals of the game, bringing the final score to 14-2. Colgate saw 10 goal-scorers during this decisive victory.

“Great to have 10 different goal scorers,” head coach Heather Young said. “Good to see some of our defenders

handling the ball more on offense.”

The Raiders are back at Patriot League play this weekend as they face No. 12 Navy in Annapolis, Md. on Saturday, April 13. The team will be battling for one of the three spots remaining in the Patriot League Tournament.