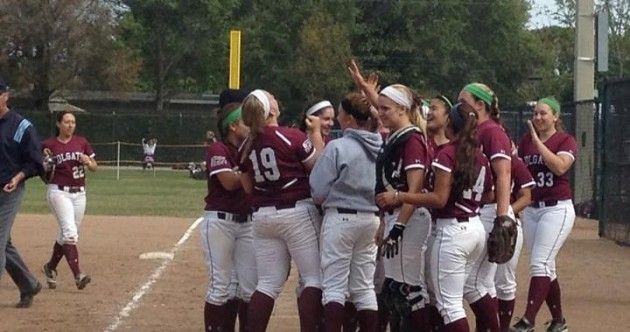 The Colgate women’s softball team bounced back after a tough 1-13 start to the season this past weekend at the Delaware State Tournament. The Raiders swept both Delaware State and Brown to pick up four wins at the tournament in Dover. Despite two close losses to a talented Princeton team, Colgate was able to find their bats and garner some much-needed victories.

The Raiders split their opening day at Delaware State, defeating the hosts 2-0 and dropping an 8-5 decision to Princeton. First-year pitcher Megan Carnase got her first career shutout and win, while the offense was led by senior outfielder Alana Dyson and first-year shortstop Marisa Dowling. Dyson, who had three hits and scored four runs through the two games, moved into fifth all-time in Colgate history with 107 runs scored and 173 hits. Dowling also added three hits, two runs and an RBI in her sixth start for

“It was great to see the team put together a good defensive effort and for Megan Carnase to get her first career shutout. We did a great job of staying mentally focused for the entire second game and I think we are starting to put the pieces together,” head coach Melissa Finley said.

The second day of the tournament brought about similar results with another split, an 8-inning 3-2 win over Brown and a tough 5-4 loss to Princeton.  Sophomore catcher Alyssa Chaulklin knocked in the winning RBI in the eighth inning, scoring first-year Alex Gadiano from third for Colgate’s first extra-innings win of the season against Brown. First-year pitcher Brigit Leuter got the start for the

Raiders, earning her first career win. She gave up four hits and two runs while striking out five batters during her eight

“It was good to see us come out on the winning end of a close game and winning in walk-off fashion is always a positive.  Brigit earned her first collegiate win and pitched a great game for us.  Offensively we had a lot of people contributing and it was an all around team win,” said Finley after the second day of the tournament.

Additionally, junior Haley Fleming turned in a solid performance for Colgate, earning two hits, two runs and one RBI in the games.  First-year Brigit Ieuter pitched seven innings, allowing six hits and four runs for the Raiders in their 6-4 win over the hosts, Delaware State.

“We had two great team efforts today.  It was nice to see our pitchers be backed up with some consistent defense. Offensively, we had a lot of contributors but Tera Vaughn and Alyssa Chaulklin had especially great days. Overall, it was a successful weekend,” Finley said after the final day of the tournament.

After this weekend, Colgate has won three in a row and five of their last

seven games heading into conference play. Next weekend, the Raiders travel to West Point for two doubleheaders against Army, where they look to build on their recent win-streak. The first two games take place on Saturday, followed by the next two on Sunday. Both doubleheaders are set to