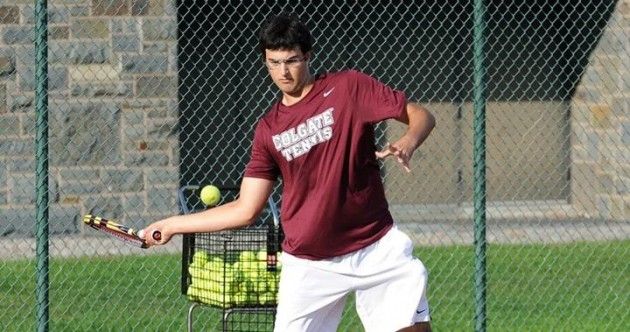 Once again, men’s tennis experienced a week of mixed outcomes. This weekend, they defeated the Loyola University Maryland Greyhounds on Saturday and fell to the Naval Academy the following day.

Although they relinquished the first of their three doubles matches, the Colgate men came back with fire in the

Senior Alec Goldstein and first-year Nick Laub claimed the second spot in a heated match with a final score of 8-4. Junior Bobby Berkowitz and sophomore Alan Pleat, too, had a hefty 8-4 win against their greyhound

In singles play, the Raiders triumphed in the first four spots. Junior Luke Gensburg took the first spot with ease, in straight sets 6-4, 6-4. In the second spot, Goldstein won in a heated, three-set contest. Though winning the first set with impressive ease, 6-0, he later lost 6-2. But in the final set of the battle, Goldstein fought back and won easily with a 6-2 finish. Berkowitz also proved his skill in a 6-3, 6-3 win in the third spot. Pleat had an impressive

come-from-behind win against his fourth spot competitor. Though marginally losing the first set in a 6-7 battle, Pleat managed to take the second set 7-6, with a 10-5 tiebreaker.

At long last, the fifth and sixth singles spots were relinquished to Loyola. First-year Mark Pronchik put up an

The men beat Loyola in an impressive 5-2 showing. The next day, the Raiders took on the Naval Academy in Annapolis, and didn’t have quite the same success, though their efforts were as vigorous as ever. The final score against Navy

The Raiders relinquished the doubles point early, with lack-luster scores. However, in singles play, the men put in a solid effort, and Beam earned a 6-3, 6-3

victory in the sixth singles position.