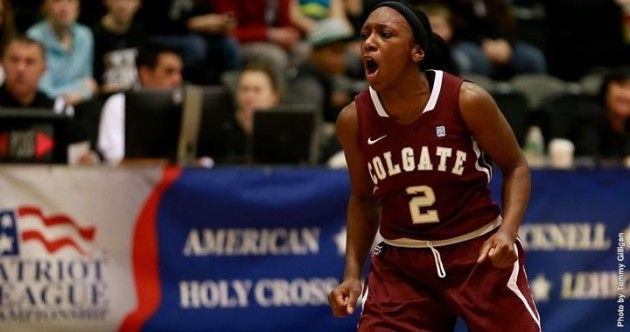 Coming off of a huge 48-40 upset against Army, the Raiders season came to an end last Monday night when they fell to Holy Cross in the Patriot League semifinals with a final score of 59-38. Finishing with a 10-21 overall record, the Raiders improved by two wins compared to last season’s record.

“We’re definitely headed in the right direction. It’s about building the program and it’s hard for the players to think about that right now. It’s not easy, but no one ever said it was going to be easy,”  head coach Nicci Hays Fort said.

Colgate went into Monday’s semifinal game with high aspirations for the Patriot League Tournament after their recent string of league victories, two against last year’s season champion Army. However, low shooting percentages hindered Colgate’s success in the disappointing loss against Holy Cross. Despite their loss, it was a personal success for the Raiders as this was their first time in a conference semi-final since their appearance in 2007.

Holy Cross came out strong, outscoring Colgate 9-0 in the first few minutes. Following Colgate’s same pattern at Army, Hays Fort called her first time out, and first-year forward Josie Stockill made the first of the Raider’s points. However, the following few minutes did not mirror what happened at West Point. Holy Cross remained solid on defense and pushed even harder offensively. Holy Cross took an overwhelming lead of 24-2 at the eight-minute mark, leaving the Raiders with 1-of-17 successful shots and eight turnovers.

“The difference was we kept rebounding and we kept defending against Army. Tonight, they were getting scores because we weren’t rebounding,” Hays Fort said.

Holy Cross held their momentum. The Crusaders made 24 field goals out of 22 assists. Although Colgate pushed back with 11 steals and a resulting 21 turnovers from Holy Cross, that initial 22 point lead made a Raider comeback extremely challenging.

“I want to watch this on film to see what happened in that first 10 minutes. The shots weren’t falling, we weren’t there mentally on the defensive end and it was very confusing. That wasn’t the way we expected to start,” senior guard Jhazmine Lynch said.

Lynch tied for team honors with eight points, four steals and two assists on Monday. Lynch concludes her successful Colgate career with 214 steals, placing her ninth on the school’s all-time steals list. Lynch also leaves 12th on the schools scoring list with a grand total of 1205 points during her time here.

“I couldn’t have done it without my teammates pushing me every day in practice and keeping me there mentally, especially when we were facing our different adversities. I commend my teammates for pushing through and finishing out this season strong,” Lynch said.

At halftime, Holy Cross still held an impressive lead of 32-14. The Raiders kept fighting to close the margin, but the Crusaders’ continued success with seven three-pointers kept them at bay. Much of their efforts were led by Crusaders’ forward Amy Lepley as the All-Patriot League second team member led the night’s scoring with 19 points.

“We matched them evenly the last 27 minutes of the game. We cut it, we cut it, then gave up a three. We would cut it, then foul,” Hays Fort said.

Stockill and senior center Lulu Brase each scored eight points. It was Brase’s final game at Colgate and as a senior captain. Brase was injured and thought her season would be over after the first 14 games. Instead, she returned and not only played in the last twelve games of the season, but scored a whopping 132 points of her 179 career point total after her injury.

“When I got cleared, I just tried to play each game like it was my last because I knew the feeling of not being able to play anymore. I just wanted to enjoy every game and enjoy the moment. We started putting things together and you could see how our program is building; you could see the pieces come together. I wish we had the first five or six minutes back tonight,” Brase said.

The Raiders will lose three seniors; guard Rebekah Ward, Brase and Lynch next year. They will surely be missed.

“Obviously it’s going to hurt us losing Jhazmine and Lulu, and Bekah practiced so hard every single day. That’s hard to do when you’re not getting a lot of time. Every single practice, you knew Bekah was going to practice hard. Lulu and Jhaz really turned it up these last eight games. We played really well at the end of the year,” Hays Fort said.

Overall, Holy Cross now with an 18-13 record, shot 44 percent in the field, and had seven-of-17 successful shots from the three-point range. The Crusaders also had 45 rebounds compared to the Raiders 32, all amounting in Holy Cross’ victory at the end of the night. Holy Cross is moving on to the Patriot League Tournament Championship this Saturday night where they will take on Navy with a 6 p.m. tip off.

Despite Monday’s loss concluding this year’s season, the team made great strides as they

continue to develop the program.

“We came to understand what we want Colgate basketball to stand for. We lost that a little bit in the middle of the season when we went into that slump, but we got it back. We can’t let this game distract us from what the end goal is for our program. The underclassmen have to live and learn. We can’t let this happen next year. If we do, then we didn’t learn from it – and shame on us,” Hays Fort said.

This season was also important for the success of the Patriot League as a whole as it was the first year every team has finished with a double-digit total of victories.

“That’s a big thing, and our league is headed in the right direction. We moved up in the RPI as a conference and we’re starting to be known as a basketball league. We got to keep fighting, staying the course and building programs. I’m so proud Colgate is a part of that progress,” Hays Fort said.