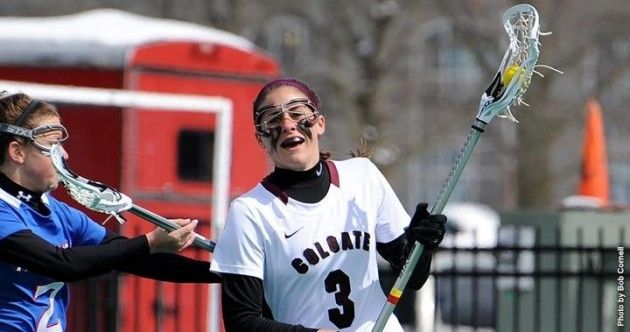 Despite closing out the first half with a three-point lead, the Colgate women’s lacrosse team fell to the American Eagles last weekend in a close 10-9 decision. This was the team’s first Patriot League loss this season.

The Raiders had a great start, surging forward with three early goals by O’Sullivan, senior attacker Brooke Flanagan and junior midfielder Alison Flood. However, with just about 15 minutes elapsed in the first half, American came back scoring two goals, and thus

cutting the deficit to one.

The remainder of the half belonged to the Raiders who, in addition to controlling the majority of the draws, scored four out of the next five goals. Gorajek scored two of the goals, and first-year attacker Kallan Murray scored the next two, assisted by O’Sullivan and senior attacker Kate Sheridan. The teams retired from the field with a score of 7-4, Colgate.

When the teams took to the field for the second half, the American Eagles came out with the fire they lacked in the first half. Throughout the half, they scored seven goals to Colgate’s two.Similar to the way Colgate started the game, American scored the first three goals of the half. However, Peebles managed to slow their momentum, tallying a goal and bringing the score to 8-6,Colgate.

American bounced right back, scoring the next four goals, giving them their first lead of the game and bringing the score to 10-8.

Colgate had two missed scoring attempts to shrink the deficit. O’Sullivan shot one goal wide and first-year Taylor Fischer fired one that was stopped by American’s goalie.

Peebles scored her second goal of the day with under one second to go, but it was not enough to send the game into overtime. The game ended with a final score of 10-9.