Tennis Struggles to Stay on Top in Puerto Rico 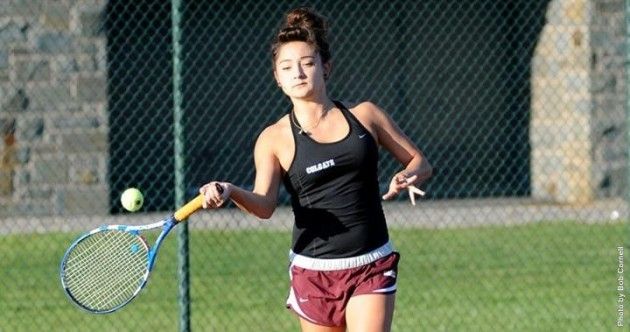 The women took on the Minnesota State Mavericks, the Old Dominion Monarchs and the Long Island Blackbirds over spring break. The Raiders started strong against Minnesota State in the hot and humid Puerto Rican air. They started the day by sweeping the doubles matches. Junior Alex Petrini and first-year Lexi Lazares won in the first doubles spot, 8-2. Junior Kelsey Shea and senior Merideth Rock dominated the second spot, winning 8-4, and senior Jackie Finn and first-year Jennifer Ho claimed the third spot with an 8-3 win.

The women then went on to win five of their six singles matches against the Mavericks. Shea pulled out an impressive three-set win in the top spot, 4-6, 6-4, 10-7. Petrini claimed a victory as well, handily beating her Minnesotan competition in the second spot, with a score of 6-1, 6-0. Sophomore Kelsey Wanhainen fought hard, but relinquished the win to Minnesota in a 4-6, 5-7 loss. The remaining three matches were taken with ease; Ho defeated her competition 6-1, 6-2, Rock won hers 6-0, 6-2, and first-year Katie Grant claimed the final match 6-1, 6-0. The final score was 8-1, Raiders.

In the following two matches, the women’s 8-0 winning streak was halted. The women suffered a 7-0 loss to Old Dominion on March 14. Though surrendering all three doubles points, second spot team Shea and Rock were almost able to claim the win, with a final score of 7-8.

Petrini and Lazares were defeated in a 2-8 loss and Finn and Ho, 3-8. Old Dominion took all six singles matches, as well.

In their final spring break match, the women took on the Long Island Blackbirds. Early on, the Blackbird competition swept the doubles matches, even though, Shea and Rock made a valiant attempt at the win, losing only 6-8. The singles matches, again, did not go particularly well. However, Ho, in the third position, played an intense back-and-forth match that went to three sets. And after great effort, Ho claimed the victory, 4-6, 7-5, 12-10. Four of the other five matches were taken by Long Island in straight sets, though Grant was able to extend hers to three, hoping for the win. Unfortunately, she came out on the wrong side of the decision, experiencing a 6-4, 4-6, 10-4 loss.

The women now hold a record of 8-2, still a very impressive standing.

The men took on the North Carolina Central University Eagles and the Florida A&M Rattlers in Puerto Rico during spring break.

The Raiders took the lead early on, dominating the doubles matchups. Junior Luke Gensburg and senior Harry Jewett claimed the first spot with an 8-6 win, while senior Alec Goldstein and first-year Nick Laub took the second spot with the same score. Junior Bobby Berkowitz and sophomore Alan Pleat rounded out the doubles wins with an 8-6 victory over their third spot

Colgate went on to sweep four of the six singles matches. In the first position, Gensburg experienced a defeat in a three set match, 7-5, 1-6, 1-10. But Goldstein won his singles match in straight sets, claiming the first set easily, 6-2, and battling it out in a tiebreaker for the second. The final score was 6-2, 7-6. Berkowitz claimed the third spot with a hearty 6-4, 7-5 win, and Pleat attained the fourth spot, winning handily, 6-0, 6-3. First-year Mark Pronchick fought hard for the fifth spot win, but lost in three sets, 6-3, 2-6, 4-6. Finally, senior John Beam annihilated his sixth spot competition in a 6-2, 6-3 decision.

“For the first time playing outside in six months and the heat, I was very pleased at how the men adjusted and fought hard,” coach Bobby Pennington said after the match.

The men’s second match in Puerto Rico was not quite as successful, as they won only two of the seven points awarded against the Florida A&M Rattlers. Gensburg and Jewett lost the first doubles spot 0-8, but luckily Goldstein and Laub were able to scrape a 9-8 win in the second spot. The third spot held by Berkowitz and Pleat was given to Colgate by default because the Rattlers did not fill all of the spots in the lineup.

Of the six singles matches Florida A&M won five, though Colgate won the final match again due to A&M’s insufficient number of players. Berkowitz did come close to a third set, but unfortunately barely lost a 6-6 tie breaker, and thus the match, bringing the final score to

Although both teams had a rocky week and the women no longer have an undefeated record, they showed a lot of heart in Puerto Rico. Both teams play the Loyola Greyhounds this weekend in Baltimore, Md.