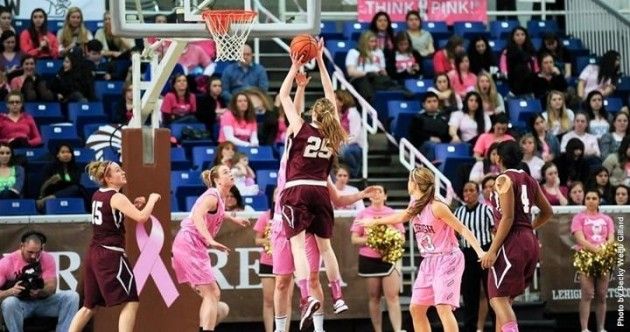 Colgate earned its first Patriot League victory this past week against Bucknell with a final score of 58-51, but fell to Lehigh on Saturday with a 62-40 loss. The Raiders finally ended their 10 game losing streak on Wednesday, earning them their first win since January 3.

Head Coach Nicci Hays Fort commented, “Hopefully, this will be like a huge three-thousand pound weight off their shoulders. This should give us just a little bit of inner confidence knowing that we can make plays down

Senior guard Jhazmine Lynch started the game out strong for the Raiders as she nailed her first shot of the game, a three-pointer from the top of the key. Although Lynch struggled during the remainder of the game as she missed all 11 attempts on the court, she contributed heavily with her defensive skills against Bucknell’s junior

“Our defensive strategy was to try to get the ball out of Romine’s hands. I’m not sure how good of a job I did, but we played good team defense,” Lynch said.

Lynch’s unusual shortage of points was abundantly improved as first-year forward Josie Stockhill and sophomore forward Carole Harris came off the bench to score a whopping 28 of the Raiders’ points. Initially behind at 12-7, Colgate fought to obtain the lead as efforts from senior center Lulu Braise carried the Raiders with excellent defensive skills and effective scoring throughout the half. Braise made nine of her 11 points for the game in the opening period alone. Colgate forced Bucknell into a scoreless five minute and fourteen second period, leaving the score at the Raider’s 23-20 advantage

“We treated it as a 0-0 game. Good teams get a lead and they don’t give it up, so we wanted to act like it was the start of a game,” Hays Fort said.

This mindset was vital as the Bison came out fighting at the start of the second half, taking the lead at 30-26 just under the 17-minute mark. Seniors Alyssa Dunn and Felicia Mgbada, who brought in a total of 14 points each, led the scoring for Bucknell. They tied with Colgate’s first-year Josie Stockhill for game honors. Stockhill kept gaining momentum as the first year, currently with two points, scored the Raiders’ next six points putting them on top at 32-30. Stockhill’s success continued as she made all four shots at the free throw line, and blocked three of the Bison shots, raising her season total to 30.  Stockhill earned 12 points out of her 14-point total during the second half of the

With only seven minutes remaining, sophomore forward Kelly Reid pushed the margin to 46-40 with back-to-back layups. First-year guard Randyll Butler’s efforts only added to the Raiders’ growing momentum as she secured the lead at 49-42 with 5:26 to spare. As Butler went to drive the lane yet a second time, Bucknell’s defenders caught her, but she passed it to a wide-open Stockhill who used it to push the lead to 51-43 with only 4:11

remaining. Bucknell began to push back but Lynch countered with a crucial jumper, and a lucky layup that put the score at 55-47 with 1:47 left in the game. Butler finished strong as she contributed a huge rebound and then blocked a Bison attempt at a three-pointer.

With less than 10 seconds left to play, Butler was fouled, made her first free-throw attempt and  missed the second, but with a vital rebound by Reid, the Raider’s earned their first Patriot League victory of the season.

“Coach wanted us to go out there, have fun and be aggressive – and this game definitely was fun. You could tell everyone was having a good time and the competitiveness was there. We got over the hump, and now we’re just going to keep pushing,”

Colgate initially came out strong against Lehigh on Saturday, but two scoring droughts hurt the Raiders, and led to a 62-40 loss. Butler tied the score at eighteen with 10:43 remaining in the first half with a driving layup, but Lehigh took off on a 12 point scoring run, which lasted until Reid scored with 1:38 to go in the first half. The Raiders didn’t score for a straight nine minutes and five seconds. Although they followed Butler’s success with another five points, Lehigh held their

At the start of the second half, Colgate only scored two points from a layup by junior Guard Lauryn Kobiela. The Mountain Hawks seized the opportunity and outscored the Raiders 23-7 resulting in a 41-25 lead.

“Doug Bruno used to say you don’t want to be ‘stuck on.’ Those stretches are what we have to avoid. We were stuck on 18 for a really long time, and then we were stuck on 23 and 25,” Hays Fort said, quoting her mentor.

For the fourth time this

season, Colgate fell short of having a double-figure scorer, but Lynch, Reid, and Butler lead the team’s scoring with nine, six, and four points each respectively. Stockhill also contributed nine points in her first collegiate start due to the absence of Lulu Braise who was out sick this Saturday.

Their two scoring droughts and a team average of 22.2 percent including four out of 17 long-range shots were all contributing factors to the final score of 62-40. Saturday’s loss leaves Colgate 7-18 overall and 1-9 in the Patriot League. The Raiders will be playing at home at Cotterell Court this Wednesday with a 7 p.m. tip off as they host Army, currently first place in the Patriot League, followed by a trip to play Navy as they travel to Annapolis on