One Billion Rising to Expose Violence Against Women 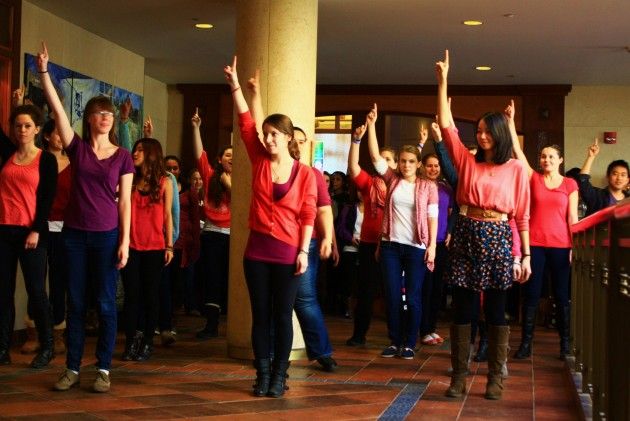 Colgate University students, donning their brightest pinks and reds, took part in the worldwide campaign, One Billion Rising, to unite and expose violence against women on Thursday, February 14.  On Valentine’s Day, around the globe, at 12 p.m., women and men alike formed flash mobs and read poetry, exposing the facts. One Billion Rising is an activist movement reacting to the most recent UN statistic that one in three women will be raped or beaten in her lifetime.

One Billion Rising was an invitation for one billion people to rise in solidarity and dance. V-Day, the activist movement to end suffering for women and girls, was the force behind the event.  In light of the flowers, candy and gifts, the 14th was a special day to remind the world about the violence that many women face every day. The ‘V’ in V-Day stands for “Victory, Valentine and Vagina,” stressing the empowerment of women in today’s world.

Surprised onlookers cheered on the twirling dancers as flash mobs simultaneously erupted in both the Coop and Frank Dining Hall at midday.  The participants jumped clapped, and swayed in rhythm to the happy, upbeat music.  Each individual, having pointed upward to the sky, represented a refusal to accept the status quo, demanding change for women around world.  After a resounding round of applause, the atmosphere was split by the rhythmic, “One, two, three  … One, two, three.”  The opening lines of the poem by Poetically Minded brought about a more somber and serious tone, yet expressed the positive outlook with which women look at the future.  The group reading of the poem was both shocking and inspirational.  The staggering statistics that were presented were juxtaposed with the passionate refusal to let the violence persist any longer.

“As a leader of The Network, I think it’s really great to see all these people fighting against the status quo and having a revolution,” senior Rebecca Raudabaugh said.

The dance was also performed at the basketball game on Saturday, February 16 as a tribute to Lesbian, Gay, Bisexual, Transgender and Queer awareness.