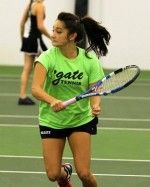 The women battled the Marist College Red Foxes at home, keeping their red-hot winning streak going, dominating the match up 5-2, and improving their already-impressive record to 5-0.

The matches to secure the doubles point were played first, and the Raiders fought hard. The top spot was filled by duo junior Alex Petrini and first-year Lexi Lazares. The girls experienced a close match, winning narrowly 9-8. Meanwhile, junior Kelsey Shea and partner senior Merideth Rock slammed their competition in an easy 8-0 defeat. These back-to-back wins succeeded in earning the Raiders the doubles point.

Singles play was competitive for the Raiders this week; three of the matches even went to a third set. Petrini played in one of these matches, as after easily winning the first set 6-0, she faltered in the second, losing 4-6, and again in the third, unfortunately losing 1-6. But this early defeat did nothing to hinder the

Sophomore Kelsey Wanhainen’s match went to three sets as well, but her outcome was more favorable. After losing the first set 2-6, and winning the second set 7-5 she was able to pull out a solid win with a 6-4

victory over her Marist opponent in the third set.

“[She] clinched the victory with her third straight set victory.” Pennington said

Shea was again triumphant in her singles match, stomping on the competition and winning easily 6-1, 6-1 and even more impressively, in the top spot. First year Jennifer Ho also conquered her opponent in straight sets, winning the first set narrowly, 7-5 and the second set with a solid 6-3.

Unfortunately, Lazares was overcome by the Marist competition, and relinquished her fifth spot match 4-6, 3-6.

“We are off to one of our best starts in school history. This is the third team we have beaten this year that we lost to a season ago. The improvement in attitude, depth and culture is staggering,” Pennington said.

The women will face off again on their home soil, this Saturday, February 23 at 10:00 a.m. against the Merrimack College Ultimate Warriors. The men, too, will play the Merrimack Warriors on Saturday, at 2:00 p.m..