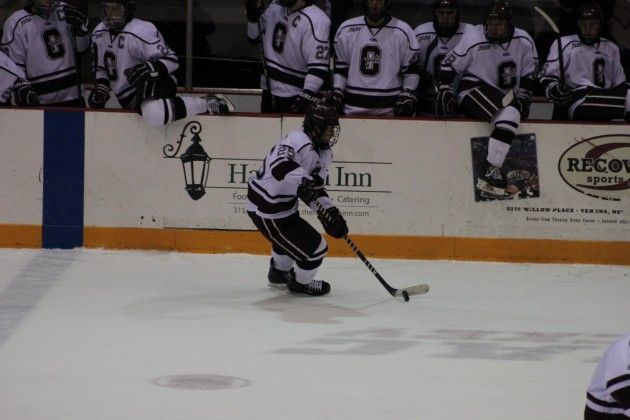 Coming off a huge 6-1 win against Princeton, the women’s hockey team suffered a 4-1 loss against Quinnipiac. Colgate senior Brittany Phillips reached a milestone in her career as a Colgate Raider on Saturday afternoon, scoring her 100th point against the Bobcats. While the Raiders lost, Phillips’ accomplishment is one that few women’s ice hockey players in Colgate history

Phillips scored her 100th point, and the only goal of the Colgate-Quinnipiac matchup, 23 seconds into the third period. Colgate’s lone point of the afternoon also marked Phillips’s 50th goal as a Raider, moving her into sixth all-time at Colgate for goals scored. To pile on further accolades, Phillips additionally ranks 10th all-time in assists for Colgate, also at 50.

Despite facing a tough foe, Colgate (9-17-3) put up a tough fight on saturday afternoon. First-year Ashlynne Rando put together yet another strong performance, keeping 33 shots out of the net, 16 of which came in the middle frame alone.

While the Raiders started the game off a little slow, they quickly ramped up their energy. Clawing to gain a lead against Quinnipiac, Phillips’s goal early in the third boosted Colgate energy on the ice, allowing for a strong third period for Raiders, even though they were ultimately not able to come back for the win.

Quinnipiac (17-9-3) was led by junior forward Kelly Babstock who managed to scoop up two goals in the contest. Senior Felicia Vieweg and sophomore Nicole Kosta each scored for the Bobcat’s as well, with Kosta racking her 11th goal on the season.

Neither team was able to find the back of the net in the initial period. Quinnipiac came out strong in the second frame, however, scoring two goals in the middle period and building up a 2-0 lead against the Raiders. Babstock led a power play at the 4:44 mark to get the initial score for the Bobcats, with Vieweg extending the Quinnipiac lead to 2-0 after sliding one in past Rando.

The Raiders were able to cut the Bobcats lead to 2-1 in the opening moments of the third frame when Phillips fired one in for Colgate. Senior Jenna Klynstra and junior Megan Wickens started the play off, finding an open Phillips only 23 seconds into the third.

At the 8:50 mark of the final frame, Colgate was penalized for slashing and Quinnipiac capitalized on the man up opportunity to score their third goal of the afternoon via Kosta.

In the last three minutes of the matchup, Colgate pulled Rando and added another skater in an attempt to pull off a last minute comeback. Colgate was unable to get another goal, and the Bobcats utilized the open Raider net with only eight seconds to go, tallying their fourth and final goal of the afternoon.

Harvard will travel to Hamilton to take on the Raiders this Friday and Saturday in Colgate’s final two ECAC hockey matches. The Raiders take on Dartmouth on Friday at 7 p.m. and Harvard on Saturday at 4 p.m., both in Starr Rink. Prior to the start of saturday’s game against the Harvard Crimson, Colgate will honor their three women’s ice hockey seniors in a short ceremony.