Part III: A Dive into the Next Phase of Colgate Athletics with Nicki Moore 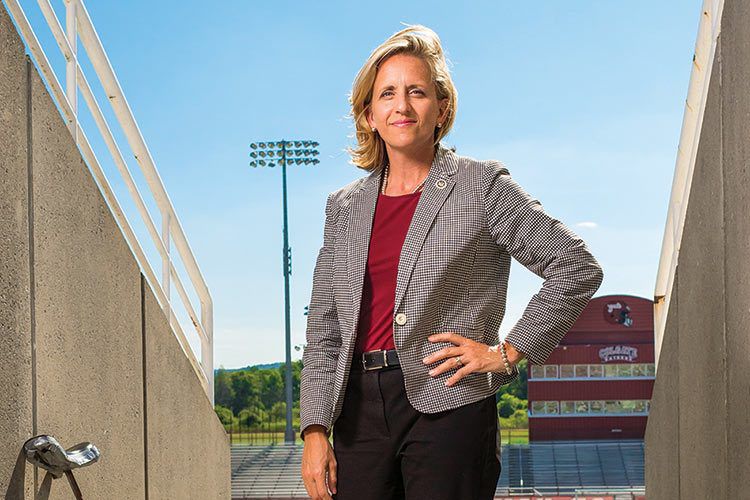 This article is Part Three of a three-part series written after an interview with Athletic Director Nicki Moore on Wednesday, Jan. 29. Part One discussed Moore’s background at the University of Oklahoma and University of North Carolina and her early impact on Colgate’s Athletic Department and student-athletes. Part Two covered Moore’s extensive background working with and counseling student-athletes on and off the fields and courts.

Once a month, Athletic Director Nicki Moore hosts a meeting with Colgate’s coaching staff where, along with going over administrative details, ideas are shared between team leaders. Imagining the exchanges taking place in that room, between the campus’s top sports minds, is an exciting picture. And in the same way a discussion-based classroom puts pressure on everyone in the room, sometimes it takes a veteran individual or two to speak up to kick things off.

“The way that group has evolved in terms of the dynamic, I noticed this last Fall, because Dan Hunt and Greg [Fargo] and Don [Vaughan] and Erik [Ronning] have been open about some of the ways they are struggling, they have shown a level of vulnerability in that group that has allowed the rest of the group to follow suit… They are not just telling what their record is, they are talking about actual challenges they are facing and getting ideas from each other. Dan in particular, with this season being really hard, helped to open it up a bit,” Moore said.

While Moore leads the formal meetings with the entire head coaching staff, about once a month, she meets with smaller groups to have more intimate catch-ups over lunch at Merrill House, too.

During those meetings, Moore tries her best to let those sitting with her guide the conversation and hopes to learn how she can help their respective programs. During these sessions, coaches tend to share ideas with each other and exchange their personal best practices. But, it is also an opportunity for Moore to ask her questions and get feedback on individual teams from the head source.

One of the topics discussed is the department’s emphasis on working on inclusion. While reading Robin DiAngelo’s “White Fragility” over the summer, Moore realized creating a more inclusive community cannot be a fourth or fifth priority, it has to be at the top if a serious change or spike in awareness is going to happen.

The feedback from the 2018 delegation was that Colgate needed to send more people the next time around, so Moore went with a bigger group this past year. There can be a gap between populations of all kinds on Colgate’s campus; student-athletes of color, in particular, can be a vulnerable group. Moore emphasized the need to speak about issues that affected student-athletes on campus, and shared a few insights from the Summit.

“One of the things I have been thinking about is, how do we get more mentorship from older student-athletes to younger student-athletes, particularly among our students of color? The other thing is just wanting to figure out, how do we do even more with connecting across the athletic space to campus along these issues? One of our student-athletes mentioned how unusual it was for him to have lots of people come up to him during this summit and initiate conversation with him. He was like, ‘that never happens at Colgate,’ and that stinks. He’s a big guy and he’s black and he’s experiencing a different sort of thing on campus than others are. So how do we get this bigger community more intentional about engaging across our differences?” Moore said.

Kouyate expressed support for Moore early in her Colgate tenure and has appreciated how she has looked out for his best interests outside of competition.

“Nicki Moore is not only a great Athletic Director, but a great person who’s looking to better the experiences of student athletes here at Colgate beyond their respective sport,” Kouyate said.

A side benefit of the new lunch tradition was Moore finding a way to fold in time to get to know the six new coach hires and hear how they are adjusting to their roles in Hamilton (an adjustment Moore can easily relate to, one could imagine). Filling a vacated head coaching role is a significant responsibility and involves a thorough process. When looking to make a coaching hire, Moore and her staff rely on a mix of consulting student-athlete representatives, a fixed hiring matrix and other methods.

Those characteristics, desired informally in student-athletes and expected from strong potential candidates, include a curated set of virtues: Thoughtful, Driven, Enthusiastic, Cohesive and Bold. Moore and the Colgate Athletic Department target individuals who possess these traits and who are eager to learn and grow everyday.

In Moore’s role, like in the day-to-day job of a coach, having vision and a short-term game plan is vital to immediate success. The short-term goals are focusing on fostering an inclusive community, friend raising and fan engagement and resource stewardship and development. One step she has taken, which was the result of a year and a half process, was the introduction of alcohol sales at the Class of 1965 Arena. For five dollars, fans who are 21 and over can purchase beer, with Utica Club Lager and Good Nature Blonde available, among others, to go along with the game.

“I think having beer in the Class of ’65 rink is going to add to the overall culture of the experience of watching a hockey game,” Hamilton Eatery owner Clay Skinner said. Skinner’s uncle, coincidentally, was part of Colgate’s 1965 graduating class and was a major reason Skinner relocated to Hamilton, according to the Hamilton Eatery’s website.

Moore also used minimal resources to modify the aesthetic of Cotterell Court by replacing lighting for more energy-efficient and easy-on-the-eyes bulbs and by moving commemmorative banners to open up the space. In the year 2020, Cotterell Court—which opened its doors for the first time in 1959, hosted the Grateful Dead on November 4, 1977 and Phish for Spring Party Weekend in 1993—is no longer a space Moore believes is able to properly represent Colgate’s athletic identity.

“It [Cotterell Court] looks like a high school gym and that is not what we are. We need to build spaces that reflect who we are and what we are becoming,” Moore said.

Like a general manager, Moore also needs a long-term strategy to carry Colgate Athletics into its next phase, along with the University’s greater Third Century Plan.

Fundamental to the Athletic Department’s own version of the Third Century Plan are three aspects: to recruit the most talented student-athletes, coaches and students possible, support programs to the level they are expected to be at and to build spaces that inspire people to live optimally.

A renovation of Reid Athletic Center, including a tear-down of Starr Rink, the addition of a health and performance center, touched-up locker rooms and coach offices and a new facade to replace the dated double-quonset hut look, is in early planning stages. Both basketball teams would benefit from a new home court, as well as the volleyball team, and the entire athletic program would have a new homebase. Reid is the first space that Moore has pegged to put significant work into when the funds are raised.

“[Fundraising] is fun to me because, really, I see it as providing opportunities and being a guide for how people who love Colgate and who have means and who want to be a part of advancing this institution in transformative ways to find the place where they can make the difference that will be the most meaningful to them,” Moore said.

Along with Reid, Huntington is another space that Moore would like to see touched up and made to be a nicer space where everyone at Colgate can enjoy spending some time during the week or weekends.

“[We want] to build spaces that inspire people to live their optimal lives while they are here. For example, as a student coming into Huntington, you can get lost pretty easily… We should have a recreational center on this campus that brings people in and has them start to develop lifelong habits of health that start here.

Moore and the Athletic Department as a whole display concerns for the well-being of Colgate’s varsity athletes, but also its greater population. The rest of the student body, between the two-credit physical education requirement, intramural sports and outdoor education, has programs that fall under her department. Moore aims to provide opportunities for activity and engagement in sport for everyone on campus.

The last, and, depending on your perspective, most controversial aesthetic change Moore is planning to see is to change the Colgate mascot. As part of the overall rebranding of the school, the sports teams needed to stay updated and some changes have already been made. The logo, for instance, switched from the maroon block C with “gate” inscribed  to the new Colgate C that was introduced during bicentennial celebrations last year.

Redesigning the mascot, and not the school’s team name, is being considered by the upper levels of Colgate’s administration as part of the rebrand, and it would not be surprising to see a change to the Raider in the near future. The new mascot, ideally, would be child-friendly and enthusiastic; a survey that was sent out to the student body indicated “creepy” was the word most frequently associated with Raider, the current mascot.

“We’ve got teams going, sometimes all around the world, out into various parts of the country who might not otherwise hear about Colgate, or know who Colgate is. Part of our job is to carry the banner of Colgate to those places and so we need to look like Colgate, and we didn’t, I don’t think, as well as we could have. We’ve been working on this [re]branding process since last summer, we’ve been working to review our marks and our font, and our platform and our mascot,” Moore said. We don’t know yet where it is going to go, but my hope is that it becomes a non-human form. I just think human forms are problematic for all kinds of reasons.”

If the vision comes to fruition, Colgate Athletics will have a brand new look under the leadership of Nicki Moore.

While its teams have excelled in recent years, with a NCAA March Madness run, NCAA Sweet Sixteen men’s soccer appearance and the women’s volleyball team’s historic season, to name a few examples, Moore’s approach will aim to spur growth in every program.

Her counseling background, dynamic, high-level NCAA Division I experience and naturally motivated attitude as a leader and listener should serve well in the bold task she has set ahead.