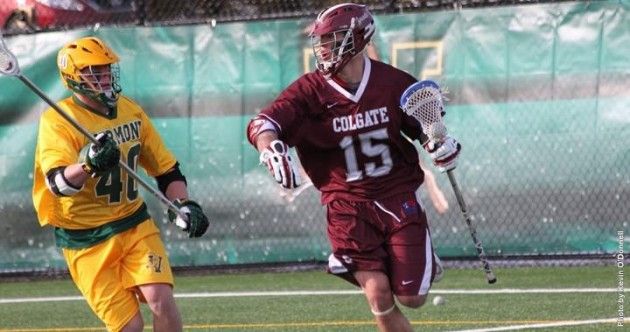 Last weekend, the Raiders traveled to Burlington, Vt. and picked up their second win of the season in as many games, defeating the University of Vermont by a score of 13-7.

Going on the road for a second straight weekend was a difficult task for the Raiders, but led by the veteran on the team who came in battle-tested, the Raiders did not falter in what was considered a winnable game. Coming in ranked near the top 10 in both major polls, junior Jimmy Ryan and Tewaarton Award winner senior Peter Baum came out firing with two quick goals to put the Raiders on top early. After the Catamounts responded with two of their own, Baum, who led the Raiders in scoring last year, added his second of the game to close out the quarter.

Heading into the second half, UVM quickly got on the board in the first two minutes to tie the game back up at three. Around the midpoint of the quarter, senior Connor Brown scored off a Baum assist and sophomore Ryan Walsh tallied one a few minutes later to put the Raiders back in the lead. The Catamounts, however, crawled back into the game and went into halftime with the score knotted up at 5.

As the Raiders came out for the third quarter, junior Brendon McCann decided to take over and show his skill. McCann started quickly, scoring less than a minute into the quarter. Not stopping there, McCann tallied the next two goals of the game in the following minutes putting the Raiders up 8-5. Before the quarter came to a close, however, the Catamounts put one on the board with 2.3 seconds left to pull the score closer.

45 quick seconds into the last quarter, McCann fired his fourth goal of the game and just a few minutes later Ryan scored by shooting across his body to put the Raiders up 10-6. Midway through the quarter, Walsh tallied his second and McCann tallied his fifth and final goal of the day just six seconds apart. While the Catamounts scored a half a minute later, the game was well out of reach.

With just over two minutes to go in the game, Baum scored his third of the game and put the icing on the cake in what turned out to be an impressive victory for the Raiders. Although the teams went into halftime tied, the Raiders held a clear advantage in the second half and the

Leading the Raiders with his five goals on five shots was McCann while Baum was also able to pick up a hat trick as well as chipping in an assist. Baum, who broke the Colgate scoring record in last week’s victory over Bryant, approaches the Patriot League record and is now just three goals shy of Justin Zackey’s record. Zackey recorded 138 goals while playing for Bucknell in 1991-94.

In addition to his two goals, Walsh also had three assists while sophomore Matt Clarkson had two assists as well. Ryan finished the day with two goals and junior Aaron Darr had an assist. First-year Gordon Santry started in goal for the second straight game and had 11 saves on 18 shots. The Raiders travel to Hanover, N.H. to take on Dartmouth next weekend.