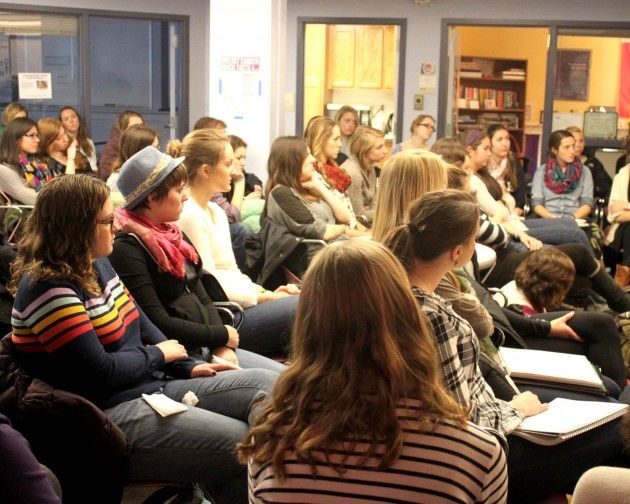 There are 412 division one schools in the country and only eight of those schools have female athletic directors. Fortunately for women’s studies enthusiasts, Colgate is one of those eight schools, thanks to our Athletic Director, Victoria Chun.

Women’s studies brown bags have become so popular lately that they may have to start turning people away. Every Tuesday at 11:30 a.m., the Women’s Studies program hosts brown bag lunches at the Center for Women’s Studies. During these different lunches, there are a variety of speakers (including students, professors and visitors) who come to discuss topics including gender, sexuality and even women’s athletics.

Last Tuesday’s brown bag, “Celebrating National Girls and Women in Sports Day,” discussed women in athletics and women in sports in general. The meeting was so crowded that some people even had to sit on the radiators just to get a space in the room. There were a number of speakers present at this event, including Chun herself.

In the meeting, the women’s studies advocates discussed many of the differences between men’s and women’s sports and the support that they receive from their fans. Many more fans take time out of their busy schedules to watch men’s games rather than women’s. This is especially true with ice hockey and lacrosse. The speakers discussed how people prefer men’s sports because they are faster and more violent, yet these fans do not always understand that women’s sports have different rules and regulations that make the sports just as exciting as men’s in their own right.

In general, women’s athletics have grown and come very far in the past ten years. However, there is still a long way to go and a host of room for improvement. As Colgate students, we can start this progress by supporting our women’s sports teams just as much as our men’s sports teams.

Women’s studies-hosted events and courses have become increasingly popular on Colgate’s campus. With such an immense population at brown bag events, everyone seems to want to hear what these speakers have to say. Women’s athletics is just one example of the issues discussed at these brown bag events. Some other examples include “Contraceptive Justice: Why We Need a Male Pill,” which was discussed on January 29, and “Vaginas Against Violence” from February 12.

This upcoming week’s brown bag is titled “Colgate’s Bias-Related Incident Policy” and will be held on Tuesday, February 19 at 11:30 a.m. in the Center for Women’s Studies in East Hall. Join many of your fellow classmates in the rapidly increasing women’s studies movement – if you can find a space to sit.