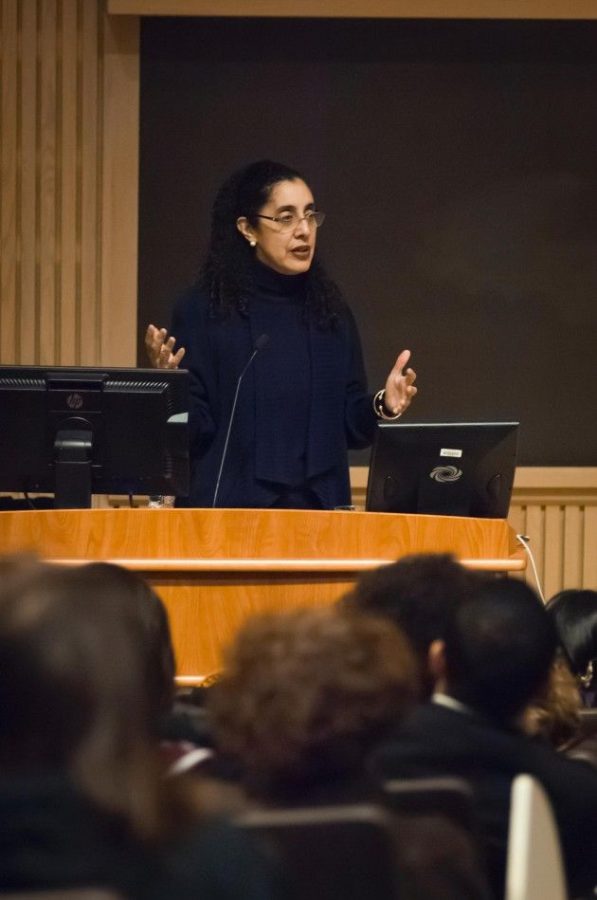 Love Auditorium was packed on the night of Wednesday, February 6, for the first of many events honoring Black History Month at Colgate. Wednesday’s Keynote Speaker Lani Guiner, presented an interdisciplinary approach to the subjects of race, class and identity in America today.

Her talk, entitled, “Rethinking Race and Class” was presented by the African, Latin American, Asian American and Native American (ALANA) Cultural Center, Brothers, Sister of the Round Table, the Robert A. Fox ’59 Leadership Institute as well as the departments of Sociology, Women’s Studies and African-American and Latina Studies.

Lani Guiner, an American lawyer, scholar and civil rights activist, was the first Jewish amd African-American woman professor to be tenured at Harvard Law School. Having spent her life devoted to issues of democratic law, race and gender within the political process, equity in college admissions and affirmative action, Guiner has used her public platform  and knowledge to write five books about these subjects.

Guiner’s 1994 publication, “The Tyranny of the Majority,” focuses on alternative voting systems that would strengthen minority groups’ voting powers. Her work not only focused on racial minorities, but  also included religious and socio-economic groups. Guiner has won various awards for her work, including the Champion of Democracy Award from the National Women’s Political Caucus, the Margaret Brent Women Lawyers of Achievement Award from the ABA Commission on Women in the Profession as well as the Rosa Parks Award from the American Association of Affirmative Action.

As her visit to campus marked the beginning of a month dedicated to African-American history, Guiner framed her discussion about race and class through the lens of racial segregation and the history of the Civil Rights Movement. Intertwining the issues of race and class, Guiner opened with a thesis developed by Beth Roy that explained the anger of poor and middle-class white students and parents towards the 1957 integration of Little Rock Central High School as a reaction to their feeling of despair at their own unfortunate economic condition. In other words, middle class whites feeling cheated out of their American dream, seeing blacks as having stolen the seats in school that had previously belonged to them. This concept, Guiner stressed, requires that Americans understand issues of race as inherently related to issues of class.

Guiner continued by discussing other case studies that point towards the relationship of race and class in contemporary America. She specifically cited the current Supreme Court case, Fisher V. University of Texas, which questions issues of affirmative action, to discuss how many schools focus on mechanisms to track the race, but not class, of applicants. Guiner also pointed to standardized testing as facilitating the process.

“While many schools admit in the name of diversity, accepted students are usually much more diverse in terms of their ethnicity or race than their socio-economic class,” Guiner said. “The SAT is a proxy for class.”

From Rosa Parks to racial literacy, Guiner’s presentation focused on a diverse range of topics, all of which questioned the role that race plays in contemporary society. Her discussion of the different contexts in which such question emerge spoke to the larger theme of Black History month, namely, in the words of Gerald Ford, “to honor the too-often neglected accomplishments of black Americans in every area of endeavor throughout our history.”