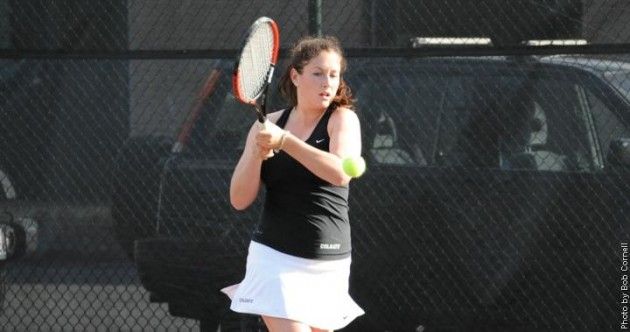 Men and women’s tennis both had good weeks on the court at St. Bonaventure on Saturday, February 9 and at Rochester on Sunday February 10. The women remain undefeated after closely beating the St. Bonaventure Bonnies 4-3, and conquering the Rochester Yellowjackets 7-2. The men came up short against the Bonnies, encountering a 3-4 loss, but triumphed 7-2 against the Yellowjackets, giving them a 2-4 record so far for the

The women started strong at St. Bonaventure, securing the doubles point with junior Kelsey Shea and senior Merideth Rock winning in the second position, and first-year Katie Grant and senior Jackie Finn claiming the third position. After winning the top three singles matches, it looked as if the Bonnies might make a comeback, but Raider wins in the next three singles matches quickly squashed St.

Sophomore Kelsey Wanhainen was especially impressive, in the fourth singles position, with a come-from-behind win. Despite relinquishing the first set 3-6 to her Bonnie opponent, Wanhainen only gave up three games of the next 15, handily securing the final two sets 6-1, 6-2.  First-year Lexi Lazares also showed remarkable finesse, extinguishing her fifth-spot

Meanwhile, the men were putting up a good fight against the Bonnies. Unfortunately, the men got off to a rough start, losing the doubles point early on. The Raiders made an admirable attempt at a comeback with junior Luke Gensburg winning in the top position 6-1, 6-2. First-year Mark Pronchik and senior John Beam also triumphed against the Bonnies with solid 6-4, 6-4 and 6-2, 7-5 wins respectively. Though not without a good fight, the remaining three singles matches were lost, causing the men to

suffer a 3-4 loss in their fifth matchup of the season.

The women began by once again clinching the doubles point: Shea and Rock triumphed in the second spot with an 8-4 victory, and Grant and Finn with an 8-5 win in the third position. Yellowjackets claimed the third doubles match, making the score after doubles a solid 2-1.

The women almost achieved a perfect score in the singles category, winning five of the six matches. Though Shea suffered a 6-4, 6-2 loss in the first position, her teammates came back and won the rest of the matches securing a solid win for

“It is a tribute to our depth, attitude and desire to play well and work towards a championship,” head coach Bobby Pennington said of the ladies’ 4-0 record.

Although the men had an unfavorable opening against Rochester, winning only one of the three doubles matches, they did not allow their spirits to drop. Gensburg and senior Alec Goldstein won their doubles point 8-6, causing the overall score to be 1-2 after the first three matches. Soon though, it became apparent that the men were not going to let this early disappointment ruin

With unyielding confidence and intensity, the men were able to secure all six of their singles matches, a huge accomplishment. The top position was an easy victory for Gensburg, who conquered his Yellowjacket competition in a 6-1, 6-2 win. Junior Bobby Berkowitz, sophomore Alan Pleat and Goldstein followed Gensburg’s lead each winning their matches in straight sets.

Pronchik and junior Archer McFall had to battle a little harder for their wins, but both men won in tiebreakers. Overall, men’s and women’s tennis both had good weeks. The women are undefeated with a 4-0 record, and the men improving their standing, with a 2-4 record. The women will be facing off at home against the Marist College Red Foxes on Saturday, February 16 at 12 p.m. After a week away from competition, the men will host the Merrimack College