Men’s Hockey Heads Into Rivalry Weekend with No. 2 Cornell 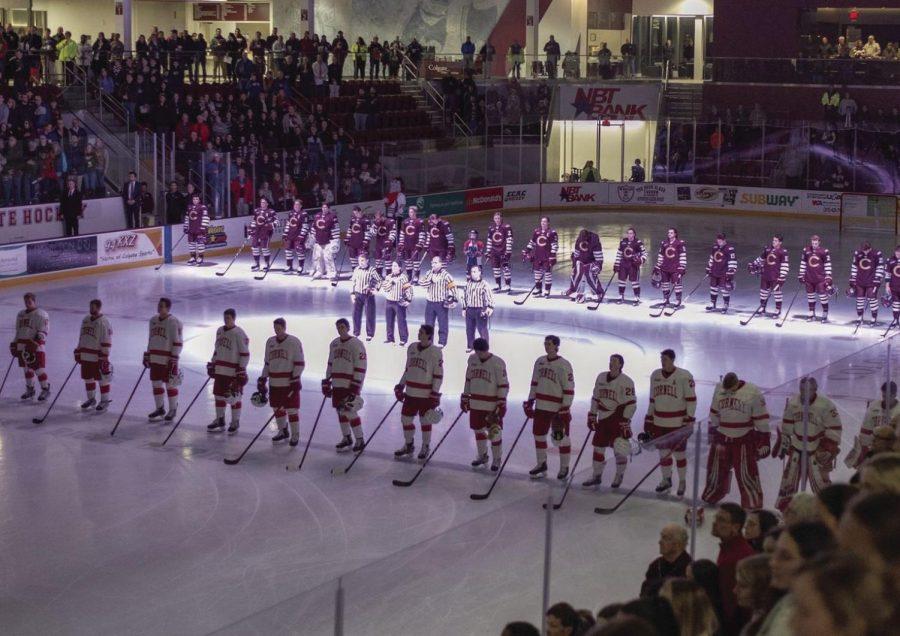 As the season progresses toward the Eastern College Athletic Conference playoff tournament in early March, the Colgate men’s ice hockey team finds itself in fifth place with a conference record of 7-4-3.

This means the Raiders are one spot away from earning a bye in the first round of the tournament.

Staring down at them in second place is archrival Cornell, ranked number two in all of college hockey. The upstate rivals will battle it out two nights in a row this coming week.

The Raiders and Big Red will play a home-and-home series, facing off at Lynah Rink in Ithaca on Friday, February 7 and at the Class of 1965 Arena in Hamilton on Saturday, February 8.

Last season, the  rivals split their regular season matchups, with the Raiders winning in overtime in Ithaca. It was the Raiders’ first win against Cornell since 2014 and first win in Ithaca since 2012.

“We got the overtime win at their place, which was really cool last year,”  junior forward Paul McAvoy said, who has tallied 13 points in 26 games this season. “Every year we’ve played them since I’ve been here they’ve been very close games. There’s a huge rivalry there so it’ll be a grind for sure.”

Over the last four games, the team has been in several spirited contests. The Raiders came away with back-to-back ties in overtime against number 16 Harvard and number 20 Dartmouth on January 24 and 25, with both games ending 3-3. On January 31, the team capitalized on an explosive second period to beat Princeton on the road 3-0, before falling 2-1 at Quinnipiac, which is one spot ahead of Colgate in the ECAC standings.

“We’re really confident right now in the way we are playing,”  McAvoy said. “We’re just trying to find that last missing piece right now to win those close games.  Like in the Quinnipiac game especially, I think if we had scored on our powerplay or killed off one of their penalties it would have been a different game for sure.”

With so many teams vying for spots in the top four of the standings, the remainder of the Raiders schedule will be a huge test of their ability to grind out meaningful wins, as all of their remaining games will come against ECAC opponents.

In addition to the two upcoming games against Cornell, the Raiders will face first place Clarkson on February 28 in a game that can greatly affect the standings just before the playoffs begin. McAvoy believes the team will need to continue to work on the things 27-year head coach Don Vaughan has stressed all season.

“So far we’ve been reiterating the things we’ve been working on all year. It’s been all about sticking to our identity and our structure, grinding down low and being physical,” Vaughan said. “It’s going to come down to the wire, and obviously these two games this weekend are huge.”

With so much riding on their performance leading up to the playoffs, the team is staying focused on what is right in front of them: two nights with their biggest rivals.

Puck drop for both games is set for just after 7 p.m..