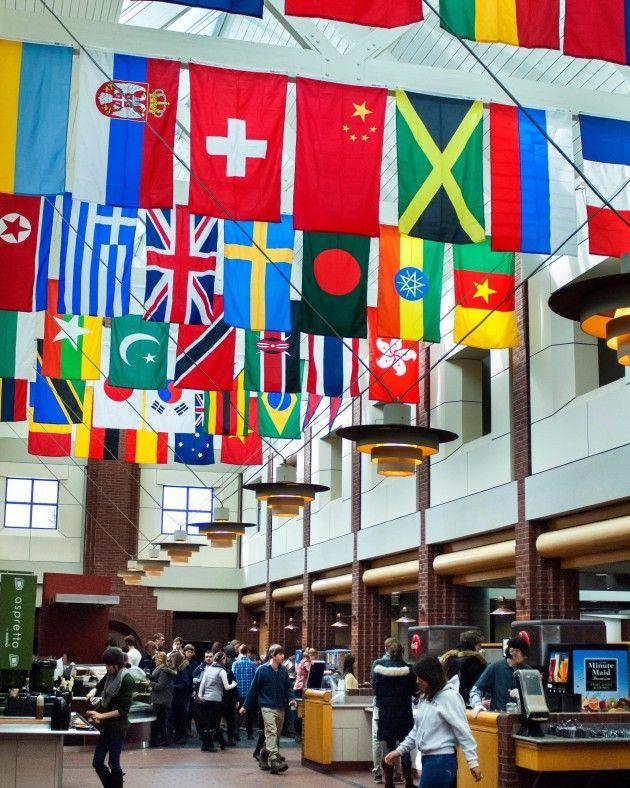 “I walked into Frank and noticed the students had, as usual, clustered according to their racial group or geographical origins. I looked up at the ceiling and wanted to hang flags to represent the countries where Colgate students hailed from to showcase our college’s diversity,” Flood said.

Flood wrote a bill for the SGA Senate outlining his proposal, which the senate passed last March. The bill mandated that one flag per nation be hung and that the flags change every year to reflect the demographics of the student body. Students may elect to sign their nation’s flag at the beginning of the academic year.

Flood chose to hang the flags in Frank because of its accessibility.

“It would remind people as they walk in of the wonderful opportunity we have to meet and dine with our peers from around the world,” Flood said.

“In the back of my head, I thought that maybe these flags could unite our university in one of its most central spaces and that prospective students on tours of Colgate will see the flags and know immediately they will feel welcomed on our campus,” Flood said.

Carpenter Jeff Golley of the Facilities Department installed the flags over winter break.

“It was up to me how I laid it out,” Golley said. “There was no order to it except that the American flag was up first. Then pretty much they were by size because they are slightly different sizes.”

According to Golley, Czech Republic is not currently represented, but the flag will be hung shortly.

Golley said that he had to make the flags fire retardant to follow a fire code.

“The flags took a long time to be ordered, fire-proofed and hung up, but it is all worth it to display Colgate as the diverse and accepting school that we truly are,” Flood said.

According to SGA Treasurer senior Jake Caldwell, the money to hang the flags and to make them fire retardant came from the SGA’s executive account that is used to fund similar projects. The initiative came out to just under $2,000.

“Regardless of cost, all of the emails about the impact of the flags have me confirmed in my belief that they had deep symbolic significance,” Flood said.

Students have responded positively to the flags in Frank.

“I felt surprised and happy that my country, which is so far away, is represented at Colgate. Seeing my flag among all the other flags made me realize how diverse Colgate is and made me happy that Sweden is accepted in the community,” first-year Nicole von Olnhausen said.

Flood anticipates that only a few flags will have to be ordered before the 2013-2014 term because the majority of countries that Colgate students hail from remain similar from year to year.

“It took a lot of meetings with myriad people on campus, but when I looked at the 48 flags hanging from the ceiling, I realized that our rural campus is unique, diverse and can be an incredibly welcoming place for students, faculty and staff,” Flood said.