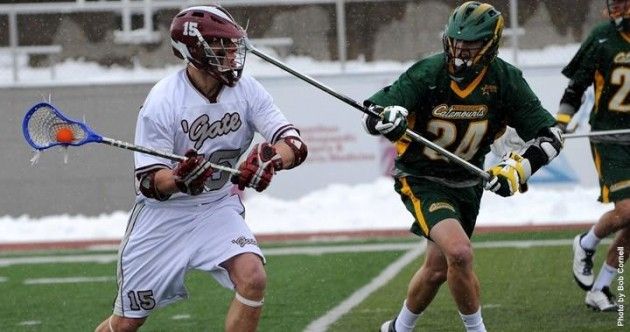 The Raiders advanced to a 3-0 record for the season this past weekend, picking up another road victory, their third in three weekends, defeating Dartmouth 13-10. The 3-0 start that the Raiders have is their first in the last 20 years, and bodes well for the rest of the

The Saturday matinee in Hanover, N.H. got off to a slow start, but senior Matt Baker put the Raiders on the board a little over six minutes into the game. Dartmouth responded with a goal to tie the game up just under four minutes later but outside of those two goals, the first quarter remained relatively calm.

As the second quarter began, the action in the game picked up. After two Dartmouth goals within the first four minutes of the quarter, senior Peter Baum scored his first goal of the game to put the Raiders back in it. After Dartmouth capitalized on a man-up advantage to increase their lead by two, the Raiders responded with three goals to close out the half and head into the locker room.

With their first halftime lead of the season thus far, the Raiders were sure they would not let go of their lead. Continuing their streak going into the second half, the Raiders scored the first three goals of the second half, including two from junior Brendon McCann who finished the day with a hat-trick. The Raiders then caved and let in two goals before Baker and sophomore Ryan Walsh both tallied their second goals of the game. This closed out the quarter and gave the Raiders a 10-6 advantage going into the final quarter.

At the start of the fourth qurater, McCann finished off his hat trick, scoring just under five minutes in. Dartmouth responded, but Baum fired his third goal of the day, scoring after sophomore Matt Clarkson’s second goal of the day. Junior Nikki Dyenschuk scored the next two goals for Dartmouth completing his hat-trick and bringing the deficit down to three goals. Baum, however, took over and scored his fourth goal of the game. Despite Dartmouth’s man-up goal with just under two minutes to play, the Raiders held on for the 13-10 victory.

In addition to the team’s success, Baum had personal achievments not to be overlooked. After leading the nation in scoring last year, Baum came into the year only a few goals behind the Patriot League record set by Bucknell’s Justin Zackey. With his third goal of the game, Baum tied the record and his fourth set him over the edge. Baum now holds the Patriot League scoring record and looks to improve it as the season goes on. In addition to Baum’s four goals of the game, he also assisted two goals. Baum’s nine goals on the year tie him for the team-lead.

Other notable performances of the game were junior Jimmy Ryan had three assists and a goal, while junior defenseman Bobby Lawrence also pitched in an assist. In goal for his third straight game, first-year Gordon Santry had six saves.

This coming weekend, the Raiders travel to Ithaca to face off against the highly-ranked Cornell Big Red.