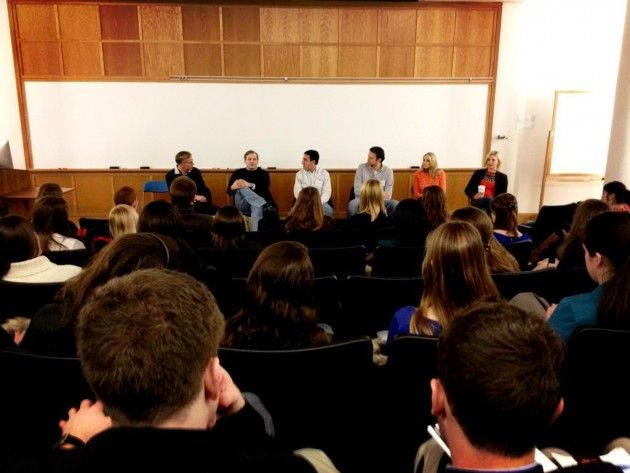 After eight months of adaptive renovation, Lathrop Hall was reopened in December as the new location of the English, Writing and Rhetoric and University Studies Departments. It is also the new home of the Writing and Speaking Center. The $9.45 million renovations highlight some of the old architectural features of Lathrop and also include updated technology in the classrooms and a climate control system. The project was also designed to achieve LEED Certification in keeping with Colgate’s mission to be more environmentally friendly. This is the second and final phase of renovation as Phase I was completed in 2011 with the refurbishing of the first floor and basement. According to Project Manager Robert Dwyer, plans to renovate Lathrop were first considered after the construction of the Ho Science Center. “Even before we moved everyone out of Lathrop and into the Ho, they knew they were going to have the opportunity to do something with Lathrop because it was going to be, for the most part, vacant,” Dwyer said. Tai Soo Kim Partners, the architectural firm Colgate hired for the project, designed the new building to “provide almost 16,000 net square feet of prime academic space” and to restore Lathrop to “its proper place as one of the most important academic buildings on campus,” according to the its Design Development Report. Lathrop was originally built in 1906 and contained mostly science classrooms and labs as well as space for a museum. However, in the 1970s, Lathrop underwent a renovation that covered over many of the building’s distinctive features including the central skylight, light monitor and the double-height museum space. The recent renovation, which began in May of 2012, has uncovered these features and restored some of these original designs. The vaulted ceilings, plaster ornamentation, twostory windows and ornamental railings that once defined Lathrop have been brought back and preserved in the new renovation, mixing with the more modern additions of a climatecontrol system, and brand new projectors and computer systems in the classrooms. The museum space has also been converted into a two story lounge and study space for students. “My favorite part of the renovation would be all the original plaster, moldings and crown work because that was all buried before in the 1970’s ,” Dwyer said. “To recapture the old architectural elements and expose them in all their grandeur is really exciting.” Besides preserving the old elements of the building, Dwyer said it was also very important that the new building be more environmentally friendly. The minimum goal of the project was to achieve Leadership in Energy and Environmental Design (LEED) Certification. “It is much more difficult to get

LEED certified with a renovation instead of new construction. We at least wanted to get certified and as things seem to be panning out, it looks like we will get Silver which is quite impressive,” Dwyer said. In order to become certified, the building was designed to incorporate more natural light and was reinsulated to conserve energy. The furniture, flooring and light fixtures also incorporate materials that are environmentally friendly. “With the new renovations, you definitely get the best of both worlds,” Professor of English Michael Coyle said. “It is modern and has all this great technology and modern features, but at the same time it has with all the old architectural details. The space really enhances the educational environment.” The Writing and Speaking Center has also relocated to Lathrop. The larger space contains a special room for practicing presentations within the office. The new location is much more functional, according to senior Rachel Weinstein, who works for the Writing Center. “The changes are great, but right now it’s still kind of sterile,” Weinstein said. “We just need a little time to make Lathrop Hall our own.” Sophomore Christelle Boursiquot said that she really liked the changes and felt that the building has been improved upon. “It is definitely more modern and brighter. When I first walked in, I immediately noticed the changes but at the same time they kept a lot of the essence of Lathrop. Now all the glass and clean tiles just give it a more modern and comfortable feel,” Boursiquot said. Dwyer said his goal in renovating Lathrop was to create “a grand, comfortable space where people want to be.” First-year Meredith Reynolds has found this to be the case. “I can’t really respond to the changes since this weekend was my first expedition into the building, but I was impressed by the architecture, particularly on the fourth floor,” Reynolds said. “That is my favorite area of the building and I have been using the facilities a lot so far in order to study.”