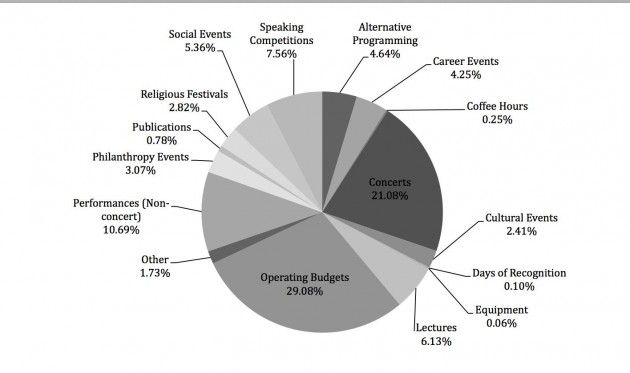 Do you want to know how much money clubs and events on Colgate’s campus receive? Student Government Association (SGA) President senior Matt Ford and SGA Vice President senior Joe Trapp have made this possible as part of their mission when elected to the SGA last spring. Helping them achieve their goal, SGA treasurer senior Jake Caldwell has transformed the Budget Allocations Committee (BAC) and the process by which student groups and events receive funding while he has been in office. Ford and Caldwell have worked together for the past two semesters to make their goals a reality.

In Fall of 2011, there were about 70 events, compared to 111 in Fall of 2012. Caldwell has made it a priority to deny less groups and events funding, hoping that even if they cannot fund something entirely, they can at least provide partial funding.

“One of my goals as treasurer has been to fund more events and more groups, and less outright denying of any events,” Caldwell said. “Last semester we probably only denied six events, so we are really pushing this. If we can’t fully fund something because of our finite resources and huge demand, we try to at least fund a portion of it so groups can continue to operate and do things even if they can’t do everything they originally planned.”

This increase in number of events has caused a debate about over programming on campus. Of the 126 groups supported by the SGA, 68 of them hosted some kind of event last semester.

“The number of events is definitely up from what it was before, but I think that’s a good thing because it means that people are figuring out how to use the Colgate system and how to work through the SGA and Center for Leadership and Student Involvement offices to get what they need for their groups,” Ford said. “I like the fact that they are figuring the system out.”

Another objective that Caldwell has successfully achieved has been to allow certain groups to be categorized as “percent allocations.” This means that groups that meet specific requirements are allocated a certain amount of funding each semester, allowing them to sidestep the process by which all other groups must go through. In order to receive this status, the group must be established, in good standing for at least four years, and must have events that cater to at least 250 people in the Colgate community.

“We created this process, which, if you’re a group that does a lot of events and has a broad scope on campus, should help you plan better, thinking ahead for a full semester rather than two weeks at a time like normal groups,” Caldwell said.

For groups that are not percent allocations, there is a process by which they must apply for funding that occurs every two weeks. They submit a proposal on Tuesdays, which the group of seven BAC members reviews on Sundays. They repeat this process for 10-15 groups per week for 13 weeks. Proposals are reviewed based on fiscal responsibility, what the group has done in the past, the attendance and location of their events, and whether or not it promotes and is relevant to the group’s mission statement.

The BAC votes on each of the proposals and the majority decides the outcome. The seven members have been elected by the SGA, who were in turn elected by the student body.

Another change involves small-scale events; any event under $500 no longer goes through the traditional application process. It is streamlined and the treasurer makes the decision based on his judgment, making the overall process more efficient. This should affect professor’s coffee hours, groups getting materials like posters and many other events and groups requiring minimal funding.

In the past, students have been concerned that bias has been affecting the way that the BAC makes its allocations decisions. Now, if there is a majority of members involved in a certain organization or an event, they must abstain from the vote. If the remaining members are not numerous enough to hold a fair vote, the vote goes to the Student Organizations Co.

“We are trying to create checks and balances so that no one club can take advantage of the system,” Caldwell said.

The largest percent of the budget, 29.08 percent, goes to “Operating Budgets,” which includes the groups and events who have percent allocations. These include WRCU, Dancefest, CUTV, SA Sound, the Travel Agency and many others.

“Additionally, the operating budget includes the Executive board’s pool of $15,000 to use to work on their projects like the social norming campaign. The senate hung the flags in Frank [Dining Hall] this fall, the Travel Agency subsidized $5 rides to Syracuse, and the $53,000 that goes to Colgate’s Outreach, Volunteerism and Education each year is paid out of operating budgets,” Caldwell said.

The BAC has access to these resources because the administration provides a certain, finite amount of money each semester. Each Colgate student that pays tuition pays $155 per year for “Student Activities.”  Some of this is allocated to specific university departments, but after that the money is given to the BAC to allocate to student groups and events. Last semester, the Committee began with $506,000, while this semester they are beginning with $444,000, meaning that roughly a million dollars per year is used to fund student run events and clubs.

“Before last semester, there was no transparency, a million dollars were being allocated and no one really knew where all of it was going, how it’s being allocated,” Caldwell said. “One of the goals is to make the BAC seem more open. We have two dozen organizations represented via our seven members, so we want people to remember we are students and involved too, not just a panel of people that are saying ‘yes’ and ‘no’ to events.”

This concept of fiscal transparency is one of the ways that Trapp and Ford won their election.

“Its great to be able to publicize it,” Ford said. “If people want to know about the budget then they can go and find it, which is different than it has been in the past.”