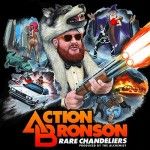 As one of the most anticipated mixtape releases this year, “Rare Chandeliers” does not disappoint. Action Bronson, the 320-pound chef-rapper hybrid from Flushing, Queens, sounds in his element over the grimy, woozy, guitar-infused production from the Alchemist.

Alchemist is one of the hottest producers in the game right now and has provided rappers like Curren$y, Prodigy and Domo Genesis (Odd Future) with some of the best instrumentals around. Alchemist and Bronson have collaborated multiple times before, but the results have never been as special as they are here.

Although there have been some gems here and there, this year has been a bit disappointing in hip-hop. Kendrick Lamar’s major label debut is probably the best release we will see, but Action Bronson’s new project is just as spectacular in some ways.

Fans will be quick to compare “Rare Chandeliers” to his mixtape “Blue Chips” (produced entirely by Party Supplies), which was released earlier this year. Unfortunately, we don’t really see the same kind of innovation we saw from Party Supplies on “Rare Chandeliers.” Alchemist’s beats show Action in his ideal environment, but he’s not sampling Dean Martin or old Motown samples like Party Supplies did.

On the title track “Rare Chandeliers,” we get Bronson at his absolute best: ignorant, brilliant and blatant. A chorus is exchanged for samples that sound like they are from Antiques Roadshow: “That’s a terribly rare one … I could never afford a chandelier … used in earlier chandeliers.” The chandelier represents wealth, but Bronson hardly ever boasts about his cash, especially compared with his more mainstream contemporaries.

Lyrically, there is not one bad verse from Bronson on this whole tape. Each one is carefully crafted, with a nice balance of humor, food references and wordplay. The features are on point, with appearances from artists Schoolboy Q, Meyhem Lauren, Styles P, Evidence and AG Da Coroner. I almost feel bad that I was able to download this for free, especially considering I have paid for music that is of a much lower quality than “Rare Chandeliers.”

Perhaps the most innovative track is “Gateway to Wizardry,” which features Styles P. For the first few minutes, we hear Bronson over a classic Alchemist beat, with a great sample. The beat comes to a halt, transitioning to a loud, guitar-based instrumental that sounds almost like heavy metal. At first, I wasn’t sure if this beat was going to work for Styles and Bronson, but to my surprise it fits them both like a glove. Styles P provides us with one of the most sinister verses on the tape, dark from the very beginning: “You ain’t a boss, you just playin’ boss/Pop him in his head, pray on his corpse.”

Tracks like “The Symbol” will be a big draw for fans of classic rock, as Bronson spits bars over a beat that has intermittent guitar solos and a traditional bassline. Bronson sounds at home here, talking about his rise to prominence: “In only one year, considered as a veteran/Top of the line, the whip look like tropical lime/Off the boat cousin, glock by the spine/Do a murder 7:30, then they flying at 9.” This kind of intricate rhyme scheme is present throughout the entire tape.

Bronson is vulgar, bashful and intense for the majority of “Rare Chandeliers,” but there are skits to remind us that he is human like everyone else. These skits expose his sense of humor. One of my favorites on the tape is the “Intro,” where Big Body Bes (one of Bronson’s friends) kicks off the mixtape. As Bronson has noted in interviews, Big Body Bes does not say one word about the album; he only talks about himself. But his curse-filled, energetic rant is the perfect way of saying one of Bronson’s best catchphrases: “We out here.”

“Rare Chandeliers” may not be Action Bronson’s best project, but it’s a must-download because it is so different than most of the rap that’s out right now. You won’t hear any rappers on the radio talking about “lamb laced with fennel” or how they “never burnt a dinner.” Action Bronson is a rare act that combines novelty with actual talent, which is why he’s bound to stay at the forefront of hip-hop for quite some time.