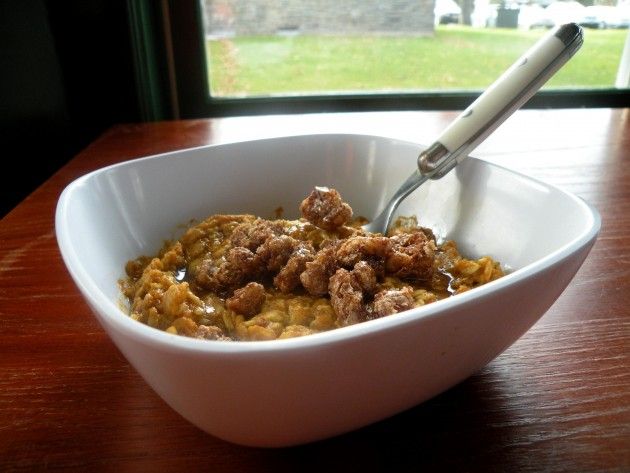 Breakfast: it’s a problem. Grabbing a granola bar on your way out the door is a good solution, but they’re kind of pricey and after a while you get tired of chewing sticky grain. We’ve found that the only way to ensure we eat a cost-effective and satisfying breakfast is to plan ahead.

In a spectacular moment of not planning ahead, my friend and I bought a 27-ounce can of pumpkin without intending to make a pie. As it happens, most “pumpkin” recipes do not actually contain very much pumpkin, so we had to try a lot of them. Arguably, this Pumpkin

Refrigerator Oatmeal was the most successful.

We were initially skeptical of the “refrigerator oatmeal” concept (isn’t heat necessary in the oat-softening process?), but we really needed to get rid of that pumpkin. As it turns out, refrigerator oatmeal is a real thing. The oats will soften overnight, you don’t have to deal with a gluey mess at the bottom of a pot and it will be ready after a few minutes in the microwave the next morning.

Not only is this oatmeal a great, quick breakfast solution, it’s so good that you’ll feel like you’re treating yourself. It can be an incentive to wake up rather than just another blurry step in the morning routine. Even if you don’t have a can of pumpkin lying around in the wake of the Thanksgiving season, there are lots of other refrigerator oatmeal recipes worth checking out.

2. Leave overnight in the fridge. The oats will magically become soft while you sleep.

3. Warm up in the microwave, throw on your toppings and head out the door.

Make the same oatmeal, but instead of just maple syrup or brown sugar, top it with Cinnamon Sugared Nuts. They are the best.

some nuts (walnuts or pecans)

2. Whisk the egg white, then mix in the cinnamon sugar, vanilla and salt.

3. Start adding nuts, stirring to coat them in the egg mixture, until either the nuts, coating or your patience runs out. This is not an exact science.

4. Spread the nuts on a baking sheet.

5. Bake for 20 minutes before allowing to cool thoroughly. Store in an airtight container.