The Resolutions and The Dischords Serenade The Chapel 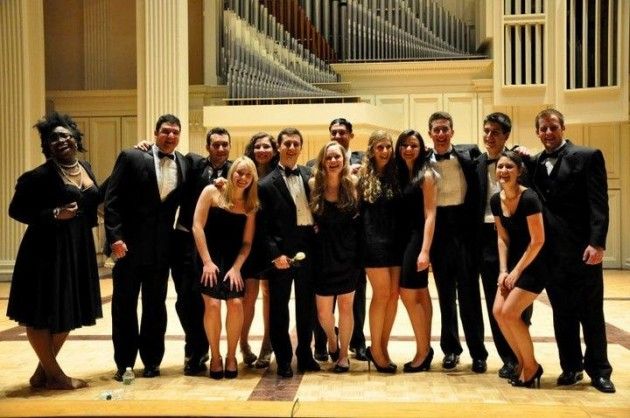 Colgate’s a cappella tradition continued Saturday, October 27, with the annual Family Weekend concert by The Dischords and The Resolutions. The two co-ed a cappella groups arranged unique sets that made for an entertaining, impressive and, as one could tell from the packed Memorial Chapel, successful addition to the weekend.

The night was kicked off by The Resolutions, or “Resos,” as they refer to themselves. Senior Caitlin McGonagle began the set with a smooth, crooning rendition of “Sun of a Gun” by Oh Land. The Resos then did justice to the new Mumford & Sons song “I Will Wait,” performed by junior Austin Allen. Next was junior Marly Levine, whose sultry voice was perfect for Maroon 5’s “This Love.” The song was personalized by the Resos with a cameo by senior Evan Weissblum, who rapped humorously mid-way through the performance. Then, senior Molly Frantzen sang “Stopping the Love” by KT Tunstall. To break up their sets, the new Resos performed their annual “newbie skit,” which was a spoof on the Resolutions’ audition process, caricaturing both new and older members.

After the humorous scene, the Resos continued with “I Want You Back” by the Jackson 5 with sophomore soloist Rachel DiSalvo. They then chose one of their older songs for a throw-back performance, singing a beautiful rendition of “Zombie” by The Cranberries, with the solo performed by senior Nikki Villanova. Senior Evan Weissblum continued the concert with his take on “Ready to Start” by Arcade Fire, and senior Molly McDevitt and sophomore David Gildin concluded the Resos’ set with a duet of Ingrid Michaelson’s saccharin-sweet ode to relationships, “You and I.”

The Dischords began with a bang, with junior Mitch Tucci singing an accurately exuberant rendition of the popular “Some Nights” by Fun.. Junior Alyssa Sokol’s alto was perfect as she followed up Tucci’s performance, singing the sultry Maroon 5 song “Never Gonna Leave This Bed” next. Continuing with the fun-spirited set expected from the Dischords, sophomore Kat Wolkin sang Annie Lenox’s “Walking on Broken Glass.” The group took a break in their set to introduce their new-est members, who put together and performed their very own “Noobie Song,” which poked fun at each of their fellow veteran Dischords and raised laughs from the audience.

The set resumed on a somber note, as senior Emily Blease gave a brief speech and introduced the next song, “If I Die Young” by The Band Perry, emotionally sung by soprano junior Annie Gaburo. To lift the mood of the concert back to a level more typical of the Dischords, sophomore Wesley Gross con-tinued the set with “On the Way Down” by Ryan Cabrera. This was followed by new member, first-year Logan Keig’s unique and gravelly take on the popular song “Tighten Up” by The Black Keys. The set finished with senior Dagan Rossini’s theat-rical performance of The Tallest Man on Earth’s song “King of Spain,” closing out a night of talent and wrapping up this year’s Family Weekend a cappella.