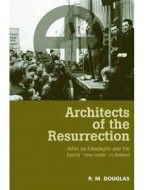 Associate Professor of History Raymond Douglas re­cently published a book about his research on a World War II-era fascist group in Ireland called “Ailtirí na hAi­séirghe” or “Architects of the Resurrection.” The book, titled Architects of the Resurrection: Ailtiri na hAiseirghe and the Fascist ‘New Order’ in Ireland was published by the Manchester University Press in August 2009, and is available for order at the Colgate University Bookstore.

Douglas happened upon a reference to the Architects of the Resurrection while conducting research on an unrelated project in the National Archives. As he began to learn more about their popularity and significance in 1940s Ireland, he decided to conduct more extensive research.

“It was a complete accident,” Douglas said of the dis­covery. “I considered myself knowledgeable on Irish his­tory and I couldn’t imagine how an organization such as this could have passed under my radar. I started reading their publications…and eventually I tracked down the son of Gearóid Ó Cuinneagáin [the leader of the Archi­tects who died in 1991]…He brought me out to a shed in his garden; it was filled top to bottom full of records. Not just papers, but banners and photographic records, everything. I got a small grant to enable me to catalogue all his material, which took me three years.”

By going through and cataloguing all of the materi­al preserved by the group, Douglas became intimately knowledgeable about the group’s ideology, organiza­tion and rise to prominence. The catalogue, longer than Douglas’ book, is now in the Military Archives of Ireland.

A striking contrast that Douglas noted between the Architects and other popular fascist groups of the time, such as the Nazis and the National Fascist Party of Italy, was the Architects’ integration of Christianity into their political doctrine.

“I think they believed Christianity gave fascism an ap­peal it wouldn’t otherwise have. It wasn’t just Catholicism; it was Christianity as a whole,” Douglas said.

This perceived “universal appeal” of Christianity al­lowed the Architects to create a “fascism-for-export” ide­ology, something radically new and different from other right-wing movements.

“They did not see themselves as knockoffs of Hitler and Mussolini,” Douglas said. “They thought that what they were developing was unique… The argument was that there was no fascism to export; it arises from the peculiarities of each country. So if you aren’t German, you have no reason to be a Nazi, if you aren’t Italian, you have no reason to follow Mussolini. But if you are a Christian, you would have every reason to join the Architects of the Resurrection.”

Douglas acknowledges that the book is causing “quite a stir” in Ireland.

“A lot of people mentioned [as members of the Ar­chitects] went on to high careers,” Douglas said. “For example one member went on to be the Irish equivalent of the Speaker of the House. Some of them were remark­ably frank [about their views]. They saw the way Ireland has turned out as a vindication of what they were saying.”

Critics have acclaimed Douglas’s illumination of this forgotten period of Irish history and his comparison of the movement with other fascist parties at the time.

“[The Architects movement] has been brought to life again by R.M. Douglas in this brilliant study,” The Irish Catholic’s Felix M Larkin said. “Douglas’ work challenges many assumptions that we blithely make about our history, notably that independent Ireland was steadfast in its commitment to parliamentary democ­racy on the Westminster model and that the ordinary Irish people—as distinct from de Valera’s government—were predominantly pro-British in sentiment during the Second World War. It presents a very original per­spective on Irish society and culture in the dark days of the 1940s.”

Douglas plans to publish another book about the deportation of ethnic Germans from Eastern European countries after World War II.

“500,000 people were killed according to some esti­mates. This is going to be 100 times more controversial than the last book,” Douglas said.