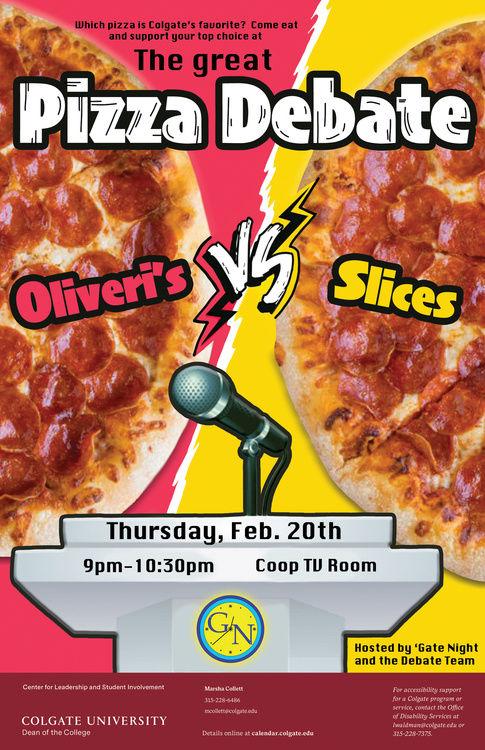 Every Colgate student has wandered down Lebanon Street in search of a slice of pizza. Now, most of the time, this wandering takes place long after 9 p.m. and in a drunken stupor leaving us with only one option: the infamous NY Pizzeria, or “Slices.” But once in a blue moon, we find ourselves craving our tomato-and-cheese topped dough cakes in the mid-day hours, and for those of us who don’t have meal swipes and are not willing to pony up the entry fee at Frank, we are left with a dilemma. On one side of the street, we have our beloved late-night institution, and across from it, one of the slightly more upscale restaurants in Hamilton Oliveri’s Pizzeria.

The debate over which to go to can be answered by some basic questions. Do you want to sit down? Oliveri’s. Do you want to grab a quick and cheap piece of pizza and then get the hell out? Slices. How about some dessert? Oliveri’s. But if you just want the best pizza, the choice has always remained unclear. Sure, everyone has their preferences and due to the practically non-existent closing time Slices has become the predominant choice of students looking for a late night snack; but the empirical answer to which one is better has never truly been determined…until now.

Thanks to the work of the Colgate Debate Team we may have found our answer. On Tuesday, February 20, the Debate Team hosted the “Great Pizza Debate,” a competitive debate-style argument about which shop on Lebanon Street whips up the tastiest pies.

Four members of the debate team in front of a crowd in the Coop TV room took turns arguing for their respective storefront, with first-years Marissa Modugno and Hunter Schaumloffe arguing for Oliveri’s and sophomore’s Ryan Ratzlaff and Anna Ehli arguing for Slices. Pizza from both businesses was given out to the crowd who were able to vote at the end of the debate in favor of their preference.

Modugno and Schaumloffe, who were given the task of arguing for Oliveri’s, arguably the more difficult of the two based on brand-name alone, put up a valiant effort. The duo attacked Slice’s chewy and overtly floured crust, calling it flavorless and time-consuming. They also argued that Oliveri’s ambiance far surpassed that of slices, which has become a customary spot for late-night hijinks as they cited one alumni’s fond memory of he and his friends running into Slices naked while attempting to raise money for charity. They also championed Oliveri’s variety over Slices, which includes desserts as well as a wide array of classic Italian dishes and sandwiches.

Ratzlaff and Ehli were not to be fazed in their response as they defended Hamilton’s over forty-year-old institution. While the sentimental value of the restaurant was brought up, they also argued that Slices pizza was both cheaper and larger and that the casual and rambunctious atmosphere that Slices has was actually a net positive. While their point that customers pay 25 cents less at Slices for a larger piece of pizza was sound, the argument that being interrupted by nudity while attempting to enjoy a slice could be considered a positive is, at its core, solely subjective. The group also argued that Slices tokens, often given out on campus for participation in research, represented the liberation of the proletariat as they are a way for broke college students to receive food for free.

At the end of this debate, the winner was left up to the crowd who, after little deliberation and by a near 4:1 margin, decided that Slices is in fact the better pizza. This result was predictable considering the crowd went through nearly double the amount of pizza from Slices as Oliveri’s.

While the debate was meant to help campus put this discussion to rest once and for all, discourse between the two groups will inevitably continue, each with their own reasons to defend their side. Still, with 1300 pizza pies sold weekly between the two, there seems to be enough room for two pie slingers in this town.