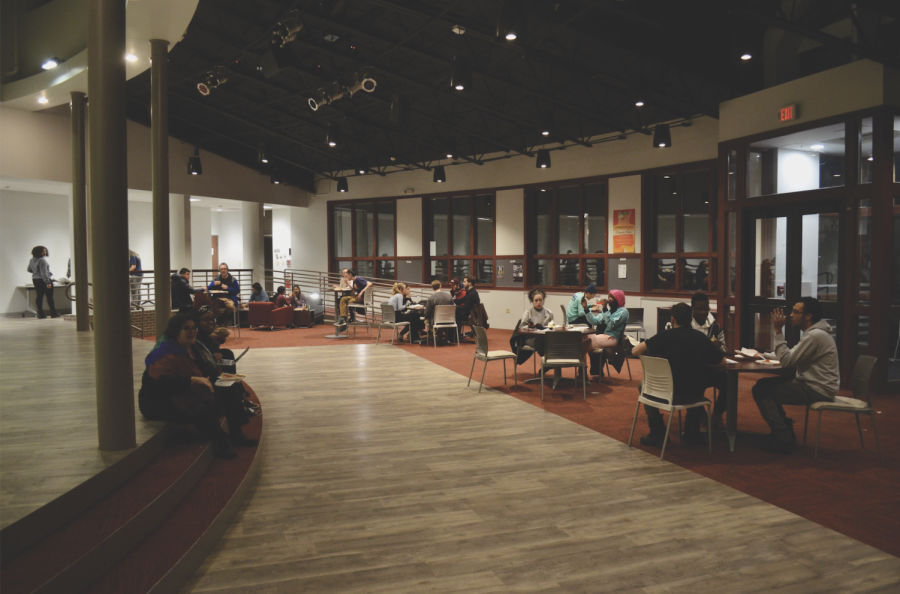 The newly established Summer Reading Selection Committee hosted a brainstorming event to help select the reading for the incoming class of 2024. Co-hosted by Hancock Commons in the Edge Café on Friday, Feb. 7, the event aimed to gather student feedback on the future of first-year summer reading, a decision that was previously made exclusively by the Dean of First-Year Students, faculty and administration.

Associate Professor of Physics and Astronomy Jeff Bary led the selection of the class of 2024’s first-year reading and decided to open up the conversation by clarifying the role of the Committee, which includes faculty and students representing their residential commons.

“We are fundamentally changing the way we select the summer reading by broadening participation, requesting nominations, asking the campus community to cast a vote for the final selection and making the Commons a fundamental part of the selection process,” Bary said.

First-year student representative of Hancock Commons on the Summer Reading Selection Committee Janiiya Hart joined the group under the recommendation of Director of Hancock Commons and Senior Lecturer in Spanish Pilar Mejia-Barrera, who has demonstrated a commitment to social justice and reform.

“[Many of the suggested books were] about race relations in America, some are definitely about politics [and] others [are] about war in the Middle East so it was definitely a variety of different texts,” Hart said. “There is a lot of privilege that occurs on this campus and a lot of people don’t understand that there are other things going on in the world.”

Hart said she hopes that the selected reading will make students aware of “different cultures [and] different mindsets so [that] incoming students can understand that they are going to be exposed to a host of different people.”

Mejia-Barrera co-facilitated the event and said she was pleased with the feedback of the approximately 40 students in attendance. She discussed potential themes that students have expressed interest in reading.

“Some of the First-Years talked about their own experience and suggested books that they think would generate conversations about acceptance,” Mejia-Barrera said.

There are over two hundred nominations from faculty and students. One of the books brought up in conversation was When the Emperor Was Divine, a novel by Julie Otsuka that follows a Japanese American family forced into an internment camp during World War II.

“[Someone] felt that book would be interesting because of the political moment,” Pilar Mejia Barrera said. “The whole community is contributing.”

“On the one hand, it’s nice to have something unifying everyone, but then I felt like it needed to be a more integral part of the [first-year seminar (FSEM)], yet every FSEM was a very different subject thus making it almost impossible,” Belzer said.

Belzer said that the integration of the summer book into the FSEM curriculum also requires future attention and change.

“I never got a grade or heard any feedback about the paper we had to write which made it feel like I had put in the effort for nothing. I think it is possible to design the summer reading assignment in a way that is beneficial, but the current method is not,” Belzer said.

“Given the diversity of courses in the FSEM program, it is unrealistic to expect every FSEM professor to incorporate discussions into the curriculum of their course,” Bary said. “Moving forward, we plan to engage the Commons and four academic divisions to create programs that will provide meaningful opportunities for students to engage with the topics and themes of the summer text throughout the academic year.”

According to Barry, student input is essential to the selection of the first-year reading, which can be chosen from a variety of genres and mediums.