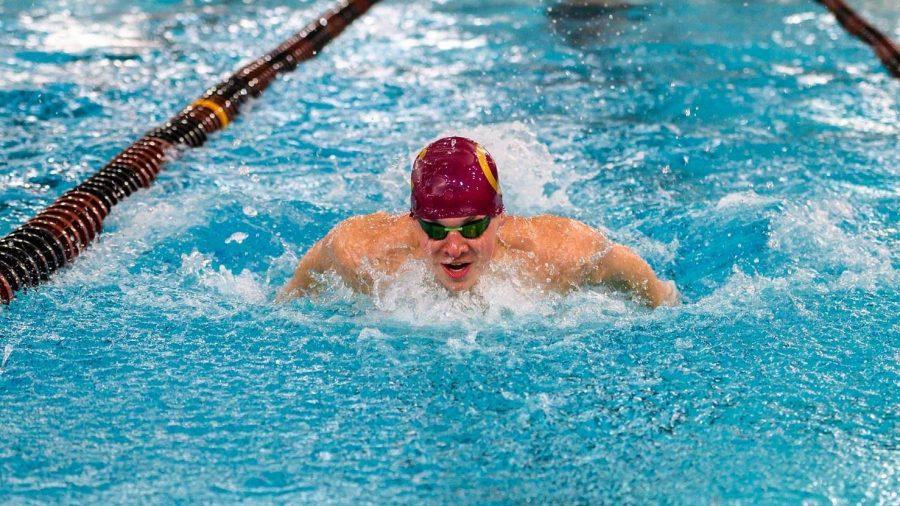 This past weekend, the Colgate Swim & Dive teams competed in the Patriot League Championships at the Naval Academy in Annapolis, Maryland.

Although both the men’s and women’s team finished near the bottom of the standings at the end of the four-day event, tenth and seventh respectively, several members of both teams set season and personal best times.

Day 1: The women’s team, made up of seniors Carolyn Silverman and Lauren deTorres and juniors Beth Caruana and Madison Sullivan, competed in the 400 Yard Medley Relay and earned an eighth placed finish. Sullivan and deTorres also competed in the 800 yard freestyle with first-year Katie Hand and junior Emma Klein, earning an eighth placed finish as well.

Junior Caroline LaPlante took ninth in the three-meter dive and earned a spot in the B Final.

On the men’s side, juniors Camden Koch and Ehran Hodes and sophomores Jack Van Meter and Segundo Reinhardt placed tenth in the 200 Yard Medley Relay. Koch, along with juniors Cole Bligh and Andrew Kelemen and sophomore Justin Song later just edged out Holy Cross by a couple of seconds in the 800 yard freestyle to finish eighth.

Day 2: For the men, senior Ian Flowers, along with Koch, Hodes and Reinhardt placed ninth in the 400 yard medley relay. Koch also competed in the 200 yard individual medley preliminaries, setting two career bests on the day.

Day 3: Katie Hand made the B Final for the 400 yard individual medley, taking 13th place overall with senior Kiersten Daly finishing just behind her in 14th place. Sullivan, Adams, de Torres and first-year Lucy Bischof posted a ninth-place finish in the 200 Yard Freestyle Relay. LaPlante had one of Colgate’s best finishes in diving, taking seventh place in the one-meter dive A Final.

The men had one relay team compete on Saturday with Koch, Van Meter, Reinhardt and Graham Russell competing in the 200 yard medley, finishing in eighth place.

Day 4: The last day of the championships featured several finals for the women’s team. Catherine Van Meter led the way for the Raiders, earning a 13th place finish in the 1650 yard freestyle final, with senior Taylor Atkin not far behind in 17th place.

After an impressive showing in preliminaries, Caruana earned an eighth-place finish in the 200 yard backstroke A Final. Wrapping up the relays, Adams, Sullivan, Klein and deTorres placed ninth in the 400 yard freestyle.

Sunday featured two season bests for the Raiders as Kelemen and sophomore Noah Zeigler shaved seven and fifteen seconds off their respective best times of the season in the 1650 yard freestyle.

Although both the men and women finished in the same place as last year, Head Coach Ed Pretre was pleased with the results from the championship meet, looking toward the future with optimism.

“What a great meet! The coaching staff couldn’t be happier about our accomplishments for this championship as well as our whole season. Tons of lifetime bests, positive energy throughout the four-day meet was exciting and is a prelude for what is to come in the future for Colgate Swimming and Diving,” Pretre said.

Both teams now enter the offseason, with competition resuming in October.