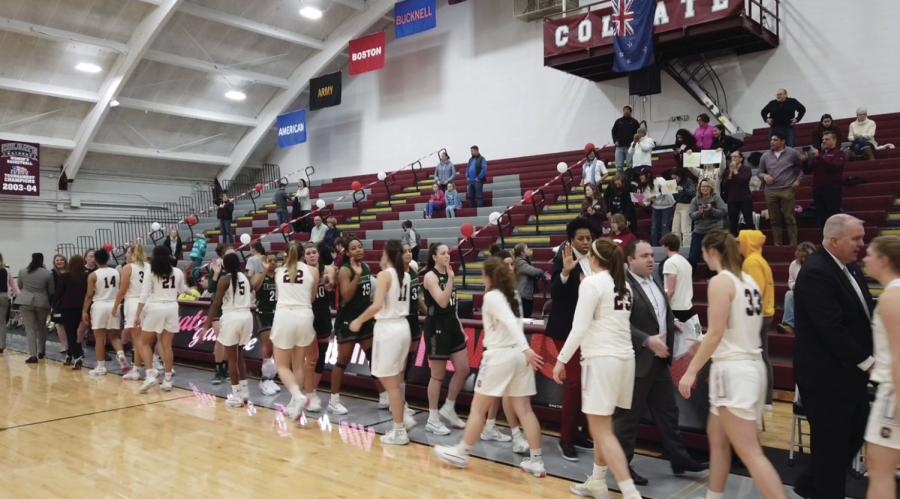 The Student Government Association (SGA) launched its Year of the Colgate Woman initiative with a tailgate at the women’s basketball Senior Day. The tailgate, held in the Reid Athletic Center lobby, sported free food from the Hamilton Eatery and games such as corn hole and oversized Connect Four. The Year of the Colgate Woman initiative aims at celebrating 50 years of coeducation at Colgate by commemorating the women of Colgate’s past and present. The initiative is headed by SGA co-Vice Presidents JJ Citron and Ayah Elarabi who have spent the semester leading a committe to plan events and programming under the banner of the Year of the Colgate Woman. The women’s basketball Senior Day tailgate took place prior to their game against Loyola Maryland on Saturday, Feb. 15.

Seniors Jess Lathan and Leah Lewis, who serve as co-liaisons of the Year of the Colgate Woman athletic sub-committee, organizedthis first event.

Lathan felt the event was held at the perfect time, as students could stop by before supporting other women’s athletics in their respective competitions.

“There are a lot of sports events going on today, the senior day for the basketball game, a track meet, so we thought it’d be cool to stop here and then people can go to any women’s events after,” Lathan said.

Lewis elaborated on the purpose of the initiative’s first event.

“We just wanted to get people out to eat, play games and talk to each other and go and support our women play basketball,” Lewis said.

Year of the Colgate Woman will continue to highlight women on campus through avenues including arts initiatives, speakers and panels, through Lathan and Lewis said their specific aim is to continue celebrating women in sports.

Elarabi explained the diversity of the different committees that contribute to the initiative.

“[Year of the Colgate Woman] is a sub-committee within SGA, but the people involved are not only in SGA. So, Leah and Jess are in our athletics committee and then we have a bunch of different committees. One of them is career-focused, one is intersectional feminism, another one is communications and alumni relations and the last one is art,” Elarabi said.

“I found out about the [committee] from SGA and that’s how I became involved. I’m really excited to be a part of it,” Colberg said. “Currently, I am helping to plan a career panel focusing on women alumni. We’re trying to bring a group of them here in April to celebrate women in different careers. There will be a big weekend of events sometime in April. We’re working on the art, branding and a new website to get the word out.”

Sophomore Sophie Miles expressed her favorite parts of the event.

“We love the games and the Eatery mac and cheese,” Miles said.

Elarabi said the committee is focused on celebrating women at Colgate through a variety of events and platforms.