Acclaimed Journalist and Alumnus Speaks on Trump and Christian Fascism 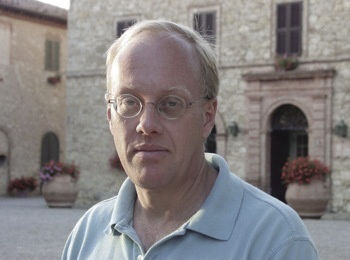 Colgate Alumnus and Pulitzer Prize winner Chris Hedges ’79 came to campus to discuss his book about the Christian Right’s threat to open society in the context of today’s presidency as part of the annual Seekers, Believers and Doubters series. This lecture, held on Monday, Feb. 24, was the second of the annual series hosted by Brown Commons and co-sponsored by the Alumni Memorial Scholars. The lecture was titled “Donald Trump and the Rise of Christian Fascism.”

The lecture series was founded in honor of Professor of Philosophy and Religion and University Chaplain Coleman Brown. Brown passed away in 2014 and is now the namesake of one of Colgate’s four Residential Commons: Brown Commons. His widow, Irene Brown, was an honored guest in the audience.

Director of Brown Commons Professor Jeff Bary explained the importance of the lecture series in recognizing a valuable person to the Colgate community.

“The series is not just a lecture series. The goal of the series is to honor the legacy of both Coleman and his wife Irene Brown’s lifetime of work making their communities and the wider world more just,” Bary said.

Hedges, a former student of Brown’s, later became a Pulitzer Prize-winning journalist, a New York Times war correspondent, a Middle East bureau chief and an ordained Presbyterian minister. He received his Bachelor’s of Arts from Colgate University and his Master’s degree from Harvard’s Divinity School. Hedges received the Pulitzer Prize for his work profiling global terrorist networks before and after the 9/11 attacks in New York City. He has published numerous books, but the lecture focused on American Fascists: The Christian Right and the War on America, which Brown edited.

Hedges also teaches courses at a New Jersey prison through a program at Rutgers University. In 2012, he was responsible for a lawsuit against the Obama administration, questioning the right of the President to lawfully detain any person. A local judge ruled in favor of Hedges’ team, but the case was never considered by the Supreme Court.

Hedges’ lecture mainly focused on the ideologies of the contemporary Christian conservative community and the role they currently play in U.S. politics. He said he believes President Trump is “a puppet” of the Christian Right movement and serves as a voice and source of power for the Christian Right’s agenda. Hedges was particularly vocal about the rights of the LGBTQ+ community within the Christian Right ideology, as his childhood best friend was gay and committed suicide due to religious pressures and homophobia that he endured.

“Mass incarceration is the most important civil rights issue of our time, and it is a multibillion dollar industry. A poor person on the streets is worth nothing to the government, but in prison he/she generates 60,000 dollars a year in labor and commissary,” Hedges said.

Hedges was very critical of the Christian Right for being a guise for fascism and hatred.

“The leadership of the Christian Right cruelly manipulates its followers. The fascist movement in America will not display itself with swastikas and brown shirts, but will instead wrap itself around the Christian cross and American flag,” Hedges said.

President Trump won roughly 80 percent of the white Evangelical vote. Hedges said that he believes the President does not have his own ideologies and consequently, the Christian Right’s policies fill those holes.

Hedges described in detail the types of people that join Christian Right organizations, the history of the movement, and what it means for us today. Leaders of those organizations select portions of the Bible to read and interpret, and make claims that Jesus embraced violence and condoned the abolition of nonbelievers. Hedges went on to point out that the majority of the New Testament portrays Jesus as the kind of man who would embrace his enemies rather than target them.

The leadership of these Christian Right organizations believe that women should be subservient to men, that abortion is murder, and that crimes such as homosexuality and adultery should be punishable by death. Hedges painted the picture of a world under the Christian Right as a warning of what could conceivably happen in the United States, and to encourage people to take action against this movement now.

Sophomore Emily Moran presented her thoughts on the lecture.

“[Hedges] was a very good speaker and had compelling facts, but he also seemed completely biased. He appeared to be an alarmist, he talked too much about his political views for the upcoming presidential election, and he did not respond as well to the student questions as he could have,” Moran said.

Senior Hannah Ritchey was also in attendance and was struck by Hedge’s sense of urgency when discussing the church-and-state conflict in America.

“Hedges was incredibly well spoken. Hearing him talk about how fascism is still playing a role in our government and general society today was really eye opening. The urgency with which he spoke about the Christian Right… really relayed the seriousness of the situation as it stands now,” Ritchey said.

“I thought it was really important to hear him speak, especially right after having Heather Mac Donald come to campus. I think this lecture accomplished what the Open Discussion Club failed to do with Ms. Mac Donald last week, and introduced a new opinion on a controversial topic but with a speaker that really knew his facts and did a good job breaking down the Christian Right movement,” Morgan said.