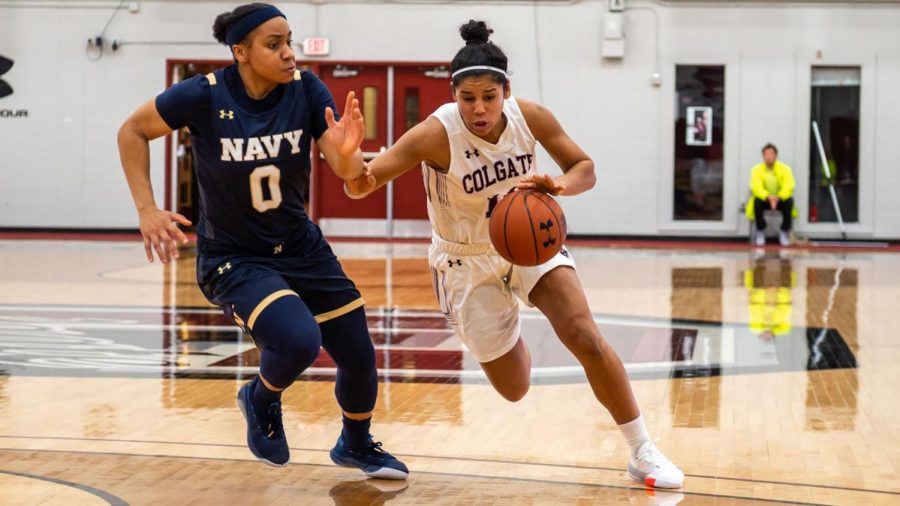 Colgate women’s basketball continued  their hot streak as they took on The Naval Academy in Annapolis, Maryland this past weekend.

The Raiders took charge early on, outscoring the Midshipmen 21-6 in the second quarter and did not allow a single point to be scored over the final 4:21 of the first half. The Raiders led 38-18 by the time halftime rolled around, marking the largest halftime lead of the season.

The Midshipmen came out strong in the second half, though, putting up 22 points in the third quarter. Navy was able to narrow the deficit at one point to 53-45, but could not close the gap any more than that.

The Raiders were able to maintain their lead due to solid shooting at the free throw line. They finished 14 of 18 from the charity stripe, including seven of eight in the second half. Their free throw percentage was 76.2 percent, which put them second in the Patriot League and 23rd in the nation. The program record was set previously in the 2015-16 season at 73.9 percent.

Overall, Colgate shot 37.7 percent compared to the Midshipmen’s 33.9 percent. Navy led in rebounds with 44 to Colgate’s 37. Colgate took charge of the assist-to-turnover ratio with 17 assists and 10 turnovers opposed to Navy’s 7 assists and 19 turnovers. These stats can be attributed to senior captain Rachel Thompson with her 9 rebounds, 5 assists and 3 steals.  Senior captain Haley Greer led the team in scoring with 15 points, sinking two of Colgate’s five 3-pointers.

The remainder of the 3-pointers were put up by senior captain Tegan Graham, junior Nia Hart and sophomore Taylor Langan. Thompson and senior captain Abby Schubiger were close behind Greer with 11 points each.

This victory was more than just that. It was the win needed to solidify a winning season for women’s basketball—the second time in program history. The only other time this has occurred was during the 2003-04 season when the team went 21-10 and went on to win the Patriot League Championship. This second win over Navy in one season is the first sweep the Raiders have been able to pull off since the 2000-01 season.

“Saturday’s game is a huge marker for our team and where we have come as a program. To be able to know that we are going to finish the year with a winning season is awesome, but in the same breath we still have a lot more proving to do. I’m just so excited for what’s to come with this team and can’t wait to get into playoffs,” Greer said.

With this win against Navy, Colgate moves to a 16-6 record, and 8-3 in the Patriot league. The Raiders look to maintain their undefeated 10-0 home record when they host Boston University on Feb. 12 at 7 p.m. Colgate then takes on Loyola this Saturday at 2 p.m. at Cotterell Court.

This home game will be senior day; women’s basketball will celebrate their seniors, all of whom have been critical to their success this season.