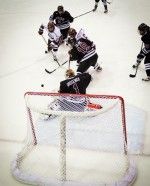 Over spring break, the Colgate men’s hockey team participated in the ECAC Hockey Playoffs. Having earned a first-round bye, Colgate had a week off be-fore it hosted the fifth-seeded Quinni-piac Bobcats in a best-of-three series. The Raiders won on Friday, 4-2, and Sunday, 4-0, while losing 4-2 on Saturday to take the series by a 2-1 score. A week later in Atlantic City, Colgate took on top-seeded Union in the league semifinals, falling by a 6-2 score. ‘Gate ended its season losing to Cornell, 3-0, in the third-place contest.

In the first game of the ECAC Hockey quarterfinals, Colgate came out on fire, supporting the notion that the week off helps more than it hurts. The Raiders quickly got on the board when Smith scored his NCAA-leading 35th goal of the year at 3:15 of the opening stanza, assisted by first-year defenseman Spiro Goulakos. Toward the end of the period, at 15:35 Quinnipiac got on the board on a pow-er play, leveling the score at one after 20 minutes of play.

Colgate re-took the lead right off the opening faceoff in the second stanza, when Wagner popped one in past the Bobcats’ Eric Hartzell, to make it 2-1, off assists from first-year forward Joe Wilson and junior forward Nathan Sinz. Quinni-piac knotted the game at two soon after, striking once again on the man advantage at 4:58. The Raiders outplayed their op-ponents throughout the rest of the peri-od, but were unable to capitalize on their scoring chances.

Entering the third frame, the contest was still either team’s game. Colgate, how-ever, made its position as the host team count by outworking and outhustling Quinnipiac. The Raiders’ efforts were fi-nally rewarded when Wagner scored his second of the game and 14th of the year on the power play at 11:32. 17 seconds later, senior forward Matt Firman added an insurance tally to make the score 4-2, which would stand throughout the rest of the contest and give Colgate a 1-0 lead in the series.

The following evening, the Bobcats were the most desperate team, playing for their season, while the Raiders were as-sured at least one more game. Quinnipiac used its desperation to put itself ahead early, scoring at 4:15 and striking two minutes later at 6:18 to go up 2-0. Wag-ner was awarded a penalty shot at 11:31, an opportunity he used to pull the Raid-ers within one. From then on, Colgate seemed to have awakened and proceeded to control play.

In the second period, the Raiders kept rolling off the momentum obtained in the first stanza. Finally, after several minutes of keeping play in the Bobcats’ end, ju-nior forward Kurtis Bartliff tallied to level the game at two. A questionable penalty called on Colgate with 51 seconds left in the period gave Quinnipiac a power play, on which it scored a controversial goal. It appeared that the puck had been kicked into the net with seven seconds remain-ing, but after several minutes of reviewing, the play was called a goal and the Raiders trailed by one heading into the final 20 minutes of the contest.

The final frame was as predictable as could be. Colgate did its best to tie the game, while the Bobcats shut them down defensively and prevented the Raid-ers from creating good scoring chances. Quinnipiac added an insurance goal on the man advantage at 18:32 to force a third and decisive game on Sunday.

The decisive game of the series was quite possibly Colgate’s strongest overall effort of the year. The Raiders opened the scor-ing early in the first when Wagner scored his fourth of the weekend at 4:37 assisted by Wilson and senior tri-captain Corbin McPherson. Throughout the rest of the period, Colgate continued to create scor-ing chances, while at the same time stop-ping every one of the Bobcats’ attempts including the highlight of the night in which sophomore goaltender Eric Mihalik, caught out of position, threw himself from one end of the net to the other, thus pre-venting Quinnipiac’s forward from scoring on the open net.

In the second stanza, the Raiders con-tinued their strong defensive play and add-ed to their lead. First-year forward John Lidgett scored his fifth goal of the cam-paign at 8:55, off assists from Bartliff and junior forward Robbie Bourdon to give Colgate a 2-0 lead. Several minutes later, at 17:08, Smith blasted his 36th goal of the season past Hartzell to give the Raiders a commanding 3-0 leading heading into the final period.

Already having a big enough lead af-ter two stanzas, Colgate dedicated itself to protecting it in the final frame. The Bob-cats had a five-on-three power play to start the period, yet the Raiders played their best defensive hockey of the weekend, preventing their opponent from creating good scoring opportunities. With a little less than five minutes remaining in the game, Wagner capped off an incredible series with his fifth goal of the weekend on an empty-net tally to help Colgate to a 4-0 victory over Quinnipiac.

Despite the following weekend’s losses to Union and Cornell, the Colgate men’s hockey team and its senior class has much to be proud of due to its accomplishments this year. The Raiders were the most im-proved team in ECAC Hockey from one year to the next, climbing eight spots from 12th place to 4th place, were ranked in the national polls throughout most of the year and have a legitimate Hobey Baker candidate in Smith.

The future also looks bright for Col-gate hockey, with a highly touted incom-ing class as well as the return of Wagner, Wilson and Mihalik among others for next year. Colgate will open the 2012-2013 season with an exhibition game against a Canadian university to be determined fol-lowed by a trip to Oxford, Ohio to take on the Miami Redhawks in early October.