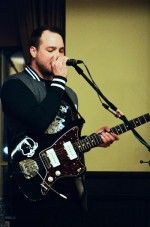 Last Friday, February 24, at Donovan’s Pub, the Maryland-based band Future Peo­ple performed for an enthusiastic crowd. Also performing were Woe of the While and Tobias Wolfe. Overall, the show was a great success because it showcased several talented musicians, all of which had their own distinct sound.

First on stage were Woe of the While. Combining an interesting mix of original material and covers, they possessed a typical indie-folk sound. Their covers of Radiohead and Beirut were especially fun to see live. They performed Radiohead’s “There, There” and Beirut’s “Post­cards from Italy” with creative flair and energy, which was impressive for such a young act.

After Woe of the While, it was time for Tobias Wolfe to take the stage. Wolfe’s music was an eclec­tic mix of reggae, hip-hop, R&B and soul. He used two separate key­boards and a laptop as he performed songs that were impressively cohe­sive, considering it was one person doing all of the instrumentation.

Finally, at about 10:10 p.m. or so, Future People came on. Dressed in stereotypical punk musician clothing, the performance started with a long, awkward back-and-forth between the lead singer and the crowd. The show was somewhat under-attended, but the band still seemed to engage the crowd and get everyone on their feet and dancing.

I was immediately impressed by how polished their songs sounded. The band sounds a lot like a mix of MGMT, Empire of the Sun, Radiohead and Wire. The mu­sic is dark and ambient, striking a balance of infectious dance and musical complex­ity. The live sound of the band was flaw­less, especially when they performed their signature song, “Naturally.”

As with every show I’ve ever been to, there are always a few surprises. Future People actually played the “Fire Flame” remix to open up their show, proceeding to, essentially, go crazy and get the audi­ence hyped up. It was ironic for me to see an artistic indie band still give in to such a loud, ridiculous song by Lil’ Wayne and Birdman. But, in a way, it set the tone for the night and, somehow, Future People matched the energy of Young Money & Cash Money Billionaires with the rest of their set.

There was a good amount of improvisation within their set, as well. There were several times when the music was reduced to a simple instrumental and To­bias Wolfe was able to spit his flow. The Donovan’s Pub crowd was enthusiastic about this, es­pecially because it was a break from the band’s other songs, which did not possess as much novelty, but were instead indie-rock masterpieces.

I really liked seeing Future People perform, and I think they are a band on the rise. Be sure to look out for their up­coming shows and festival per­formances, as it is something you shouldn’t miss.