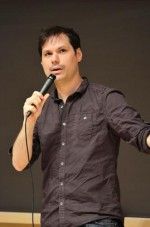 On Thursday, March 26, Love Audito-rium was filled with roars of laughter as Mi-chael Ian Black performed a stand-up comedy show. The event, hosted by the Colgate Activities Board (CAB), solicited a great crowd.

The audience was really respon-sive to Black’s performance, a relief that any comedian knows all too well, as there is nothing worse than forcing awkward laughs and smiles after a poorly-received joke. Black’s witty personality and sense of hu-mor are characteristics very relat-able to college students, with jokes ranging in content from bathroom humor and experimenting with “caf?es” in European red light dis-tricts on his honeymoon to the simple act of pausing to give ap-ples to various audience members throughout his routine.

The show was the perfect event to ease student anxiety about the work lined up in the second half of the semester. After all, is there a better way to de-stress than to spend over an hour laughing at a famous comedian?

Black used his “fame” as material in a few jokes, but he has managed to make quite a name for himself in the com-edy business and is indeed a household name across America. Since starting out in New York University’s sketch comedy troupe, The State, in 1988, Black has co-created several television series on MTV and Comedy Central, appeared in a few films and as a minor char-acter on NBC’s Ed. He also wrote and directed the film Wedding Daze and wrote a book of humor-ous essays called My Custom Van (And 50 Other Mind-Blowing Es-says That Will Blow Your Mind All Over Your Face) in addition to a children’s book called Chicken Cheeks. On top of all this work, he spends most of his time traveling all over the country performing as a stand-up comedian.

This was not the first time Black came to Colgate (though you wouldn’t know it from his opening act about the randomness and remoteness of Hamilton, New York), and we were very glad to have him back for another night of laughter.