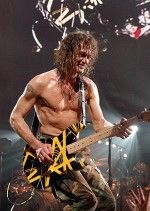 For a band as legendary as Van Halen re-forming with its nearly original incarna­tion (Diamond Dave, Eddie, and Alex are all back in, the only difference is Eddie’s son Wolfgang is slappin’ the bass instead of Mi­chael Anthony – who cares), one would have thought there would have been a lot more hype building up to such a release. In case anyone’s forgotten, it’s been 13 years since their last album (1998’s abominable Van Halen III) and 28 since their last output with Roth (the classic 1984). So why ex­actly are these guys hitting the dusty trail again after all this time? Money, boredom, desire for attention, feeling they’ve still got it; who knows? But frankly no one, myself included, should give a crap because the fact that there’s another Van Halen record with David Lee Roth back at the helm is amaz­ing and something that has seemed wholly inconceivable for decadem

Something that immediately hits you from the first listen is that A Different Kind of Truth is a very in your face, heavy, up-tempo album. Though it packs a punch, it almost seems as if they’re trying to com­pensate for a lack of youth (Eddie and Dave are 57, Alex is 58) by speeding every­thing up. Where early Van Halen records sounded very loose and carefree, this album sounds very intentional and meticulously poured over. Take a track like “Stay Frosty,” an acoustic jingle that becomes a full-on electric romp that is essentially a rework­ing of their debut album’s classic tune “Ice Cream Man.” While the latter sounds like it was recorded off the cuff when everyone was likely hammered, “Stay Frosty” sounds very professional and calculated. This is a microcosm of the record on the whole; it’s enjoyable and the musicianship is through the roof, but it can’t manufacture the at­titude or the vibe that early Van Halen so effortlessly produced. That might not be a completely fair criticism because it’s over 30 years since their peak and these guys are grandpas now, but it’s hard to overlook.

Let’s get to the tunes. The best of the bunch would undoubtedly be, “She’s The Woman,” one of the six tracks that are reworkings of unreleased demos from the mid to late 70s (the others being “Tat­too,” “Outta Space,” “Beats Workin’,”Big River,” and “Honeybabysweetiedoll”). Like any classic Van Halen tune, it suc­ceeds on the formula of a catchy lick from Eddie, a pounding rhythm section, and a big harmonied chorus that will im­mediately plant itself in your head. “Tat­too” almost pulls off the same formula, until you realize that what Dave is sing­ing is cringe-inducingly dumb. Whoever told David Lee Roth it was a good idea to build a chorus around, “sexy dragon magic” and “so very autobiographic” should be promptly fired. Songs like “As Is” and “Blood and Fire” serve as remind­ers that Eddie Van Halen can still play circles around pretty much every guitar player on the planet, and the way he plays throughout the entire album almost feels as if he wants everyone to be im­mensely aware that that’s the case, too. Other highlights include “You and Your Blues” and “Big River,” two tight groovy numbers that wouldn’t have sounded out of place on their debut record.

The problem with being a band like Van Halen is that any new record is immediately going to get compared to your classic records, especially when you’re playing music in a very similar vein. Though Van Halen will never be able to recapture the same magic they had 30 years ago, they remain a fun, talented, arena-worthy band in 2012, a time when there are few bands that fit such a bill. The fact that Van Halen is back is cause for celebration, the fact that A Different Kind of Truth is actu­ally pretty good is just icing on the cake. Now excuse me while I go crank “Hot For Teacher” at full blast.