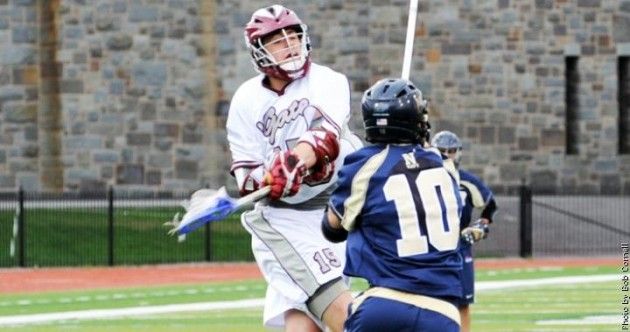 The Colgate men’s lacrosse team’s five-game winning streak was snapped in a rather heartbreaking fashion last Sat-urday, as the men lost to the Navy Mid-shipmen, 12-11. The Mids got a goal in the final seconds to earn the dramatic victory, improving their Patriot League record to 3-1. Colgate fell to 1-1 in Pa-triot League play, but held on to their ranking despite the defeat. The Raid-ers proved resilient on the afternoon though, twice being down five goals to tie the game up in the fourth quarter. However, they could never get back on top after losing the lead with just over five minutes gone in the first quarter.

The Raiders got on the board first, as they have done in all nine contests this year except one. Senior attackman Jeff Ledwick found the back of the net, but it would be the only Colgate goal of the period. Navy went on a five-goal run spanning the rest of the first quarter and continued through the first five minutes of the second period. Junior midfielder Robert Grabher was able to get a fast break off the faceoff and find junior attackman Peter Baum for Colgate’s second goal, stopping the Mids’ run.

“I do have a go-to move on the face-off that I use every time I’m out there as long as I’m winning,” Grabher said. “If I start to lose two or three in a row, I’ll adjust the speed and power I put into the move in order to play around my opponents’ strengths.”

The score stood at 5-2, and if Colgate could piece together a goal or two be-fore half, the deficit would certainly be manageable. Unfortunately, the Raiders were not able to shift the momentum away from Navy, as they bounced back with a goal a mere 25 seconds later. The teams remained scoreless until Navy scored with 75 seconds left in the half to increase their lead to 7-2, the larg-est lead they had enjoyed in the game to this point. First-year attackman Ryan Walsh added a late goal for Colgate, but the Raiders headed into the locker room facing their largest deficit of the season at 7-3.

With the start of the third quarter, Colgate needed a fast start as well as a big offensive period if they wanted to get back into the game, and that’s exactly what they got. The Raiders doubled up the Midshipmen 6-3 on the quarter, as well as getting two early goals to keep the game close. Walsh tallied his second goals, and senior midfielder John Don-nally scored off the restart to make the score 7-5. The two offensive spurts by the Raiders this period were broken up by a three-goal run by Navy. Colgate found themselves being doubled up 10-5 with about a period and a half to play. At this point in the game, Grabher stepped up his play at the face-off X and really helped initiate the Raider comeback.

“Whenever our offense gets going and strings together a bunch of goals, the adrenaline makes winning face-offs easier for me,” Grabher said. “The other guy tightens up and has to press a little more and try to create momentum while I can continue to do what I’m doing. The closer the game is and the more of a rally our team is on helps me concentrate and focus more and helps us come up with big possessions and goals.”

Sophomore attackman Brendon Mc-Cann started the comeback, beating the Navy goalie off an assist from fellow at-tackman Ryan Walsh. Grabher then se-cured the next face-off and found Donnal-ly who scored his second goal of the game, this one coming just nine seconds after McCann’s. Baum and junior midfielder Matt Baker scored the final two goals of the quarter, and the Raiders found them-selves down just one with nearly all the momentum heading into the final quarter.

The final quarter started the way many of the Colgate rallies had started – with Grabher. He won the opening faceoff and took it to the goal himself, finding the back of the net bringing Colgate level at 10-10.

“Whenever I’m bringing it down the field, I have to read what the other team is giving me before I do anything,” Grab-her said. “I try not to make the decision until I see how the defense is playing, particularly on Peter Baum, and use that to make a split decision. With a shooter like Pete at the point, it makes scoring for me a lot easier as teams will play him tighter and let me shoot from close.”

The next several minutes of the con-test remained scoreless as the teams vied for the go-ahead goal heading into the waning minutes of the contest. Navy got that goal, refusing to relinquish the lead they had held nearly the entire contest. Yet, as had been the theme of the con-test, Colgate bounced back when Baum tallied his third goal of the afternoon with under two minutes to go, level-ing the score again at 11-11. Yet despite the valiant effort the Raiders displayed in hanging around in the game, Navy’s sophomore attackman Sam Jones tallied the game winning goal with just three seconds left to ensure the victory for the Midshipmen. The goal capped off a nice afternoon for Jones who led all scorers with five points on three goals and two assists. Leading the way for the Raiders were Baum, Grabher and Walsh, all tal-lying three points on the afternoon. The Raiders won 19 of 27 faceoffs on the afternoon due to an incredibly strong performance by Grabher.

The Raiders look to bounce back again as they face another Patriot League op-ponent this weekend. They travel to West Point, NY to take on the Army Black Knights this upcoming Saturday. The game is slated for a 12 p.m. start.

“At 7-2, we’ve proven that we’re good enough to beat any team with the guys we have,” Grabher said. “But at the same time, we know that it is crucial to get a victory in every Patriot League game.”